Young ones out and about 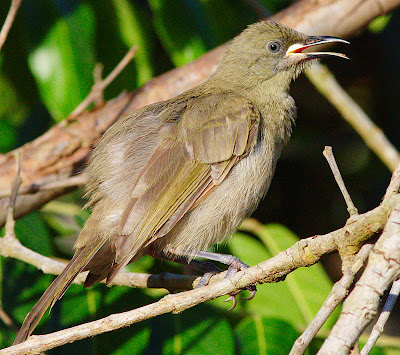 Plenty of young birds about the wetlands and more to come as serial nesters such as Willie Wagtails and Crimson Finches keep at it. White-gaped Honeyeater (Lichenostomus unicolor) juvenile popped up unexpectedly yesterday.
Bit of a surprise since the species' (aka River Honeyeater) numbers in Tyto dropped away as the creeks dried up. However, one or two birds have shown up in plantings by the carpark. They may have nested in a home garden. 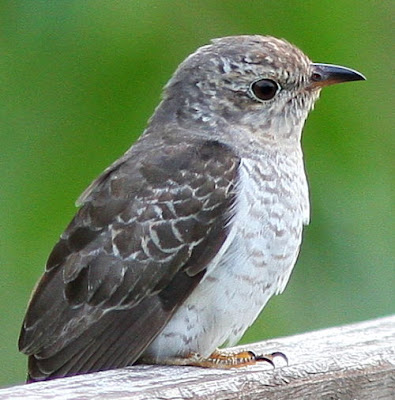 No way of knowing where or what nest this Horsfield's Bronze-Cuckoo (Chrysococcyx basalis) sprang from. The young bird was sitting solo on a footbridge handrail. Lack of colour on back and no dark stripe through eye makes ID a tad dodgy. But the plainness of young Horsfield's can be a telling point. 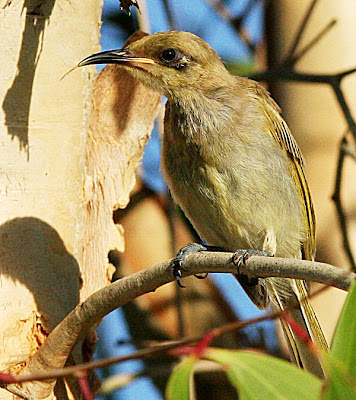 No problems with ID-ing juvenile Brown Honeyeater (Lichmera indistincta). Browns and Yellow Honeyeaters dominate the woodlands. The yellow gape at the base of the bill tells of the bird's immaturity. The typical long honeyeater tongue is a bonus. 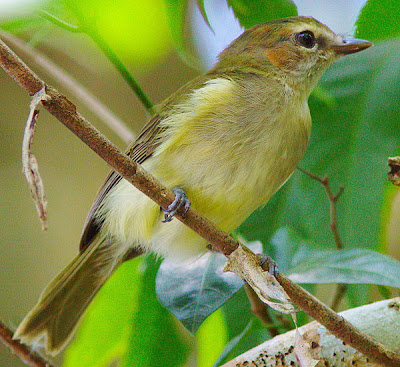 This oddly coloured Grey Whistler (Pachycephala simplex) arrived at the rainforest pool today in company with two others. But they didn't seem to be getting along. The small rufous 'ear patch' may perhaps mark the bird as a juvenile. I can't recall seeing anything similar and the guide books haven't helped.

Also at the rainforest pool today, a brief flurry of action after a long period of nothing larger than mozzies in the air. Silvereyes, White-browed Robins, Shining Flycatchers, Large-billed Gerygones, Little Shrike-Thrushes and Brush Cuckoos showed up noisily. Five minutes later, all quiet.

In back of it all, an Azure Kingfisher sat carrying a huge fish (about twice the size of that in previous post). But the bird would not cross to the nest burrow. So I quit my 'hiding' place. The question is: how do the nestlings cope with a (relatively) gigantic fish? I have no idea, so I'll chase it up.

Great photos again. Lots of detail to learn from, thanks! My knowledge of bush birds unfortunately is not as good as that about the shorebirds so your posts help!

G'day Tony,
No problems with fecundity up your way, hey? Some lovely poses in those shots.

Been way to busy to go birding, or to post anything down here, so thanks for your kick start to my day.
Regards,
Gouldiae

Excellent photos once again Tony, pictures of immatures are always valuable for identification purposes, can often solve a puzzle. Got an immature Fantail Cuckoo myself yesterday

Your immature Whistler photo might be useful if the immature stage is not well documented. Consider posting it on other bird sites, where Google Search Engines will pick it up.

Even though Blogger is run by Google, as the photos are not "labelled" as such, the Search Engines do not seem to pick them up.

Nice photo of the Horsefield's Bronze Cuckoo, especially. Liked the brush tongue of hte junior honeyeater. He hasn't learnt to keep his tongue locked away.

Hi Mick: I'm not so hot on thornblls etc. And it doesn't matter how long I stare at some small waders, they always cause me grief.

Gidday Gouldiae: Happy to help the birds lift your day.

Hi Duncan and Denis: Hadn't thought of posting immatures to help others with IDs. Makes sense, though there's the issue of picture quality - and lack of it. Bird photography sites offer daunting quality and some bird listing sites don't, to say the least.

I observed a pair of Brown Honeyeaters ferrying insects to a tiny cup nest in a straggly thorny Acacia a couple of days ago in the northwest of NSW - a beaut observation, but no pictures.