Who's going to ground?

Bush Stone Curlew spreads out after being caught unawares over the weekend. It wasn't the only one caught out lately.
After a lashing load of rain late last week came a deluge of laptop meltdowns. The upshot - apart from a large bill - is a chastened systems operator (me) and a vow to never ever ever again uninstall software without counting to 100 first.
Second, to never, never, never ever again try to System Retore-Unrestore-Rerestore. (Because it led to something akin to a time travel paradox, besides scrambling software, cocking up hardware and baffling so-called experts). Oh, and it wiped Windows out!
Can I vent for another par or two? Please? I now have software such as Photoshop Elements 6 and Canon Eos Utilities that cannot be opened or uninstalled. Since PSE6 proved less than promised for $169, that's not so bad. Gimp is a great fallback.
Canon's software is a largely useless gorilla at 550mb. But to import anything from my Canon I've had to install Picasa3, the best of a rather bossy bunch of (freeware) picture editors. But I do have my DVD/CD back. And loads of software I got rid of months ago (part of the System Restore time travel paradox).But things are moving again. 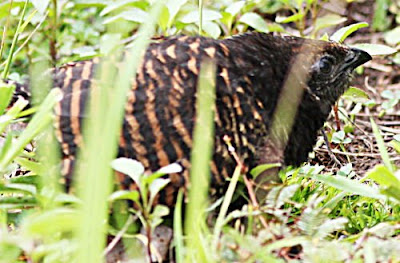 Not moving at all at the weekend, was this young Pheasant Coucal. It stayed motionless after I first spied it at the edge of some much longer guinea grass. In fact, it remained so still I started to consider the shape might be vegetable rather than animal.
As I snuck in close the bird turned and spotted me. Without much haste it walked into the long stuff. A rare sighting. Coucals keep their youngsters well concealed. The juveniles in turn learn to stay well hidden.
Gone to ground, as they say. Like some of my programs!
- December 01, 2008

Hi Tony
Our little group is having lots of technical problems, it seems.
I am OK, Touch Wood. But huge thunderstorms deserve respect.
Hope you are feeling better after your rant!

Fabulous shot of the Stone Curlew spread out like that. I have seen one "freeze" on the ground, not with the wings spread.

Great photos of two very interesting birds. Sorry for your computer woes and hope you have most sorted out by now. An interesting comment on PSE6 vs Gimp.

Wish I could blame the thunderstorms for my woes, but the weather was concidental.

It wouldn't be fair of me to knock PS Elements by comparing it to Gimp (which competes with full versions of Photoshop). It just happens that I have Gimp and prefer to use it for most PostProcessing. I do think the latest, stable, Gimp matches PS, though users in Aust are few and tutorial support lags way behind new versions.

I gave up on Windows years ago and turned to Linux and Gimp. Hope you've got it all sorted.

Yeah, nice shots Tony. I can sympathise with your IT troubles! I agree that you can do without the Canon software, I counsel everyone I know not to install it. Just get a card reader and use Picasa, that's what I do with my cameras, forget the software that comes with your camera, whatever the brand. A mate had the Canon stuff installed a couple of years ago and it created all sorts of problems in his box. Eventually I had to format and reinstall everything for him. If only Gimp would come up with macros, like the Photoshop actions, I use both but for sheer usability Photoshop is best. Gimp is a powerful program, but I must say I get better results from Photoshop with difficult images. End of rant.

I'm amazed that we are all Gimp users. Did you both stick with it in spite of the crazy first interface and crashes? Three years ago, when I got back into PCs - but not on the web - I couldn't find a better buy for $10! I'm for Linux in principle, but lack the confidence to drop Windows.

A question on Picasa. Does it use auto sharpen on the viewer? And does this lead people to wonder why their
(non-PP) prints don't look so great?

Good question Tony, I don't know. Actually the viewer is a feature of Picasa that I don't think much of. I use the program mainly for ease of downloading from the camera, and cataloguing of images. It's very handy for scrolling through albums looking for images too. I actually prefer Ulead Photo Explorer, but one of the XP updates (I surmise) has caused it to crash repeatedly so I've given up on it. Irfan View which I also used to use developed the same crashing habit. At least Picasa is stable.