Robins bob up - BBs bounce back 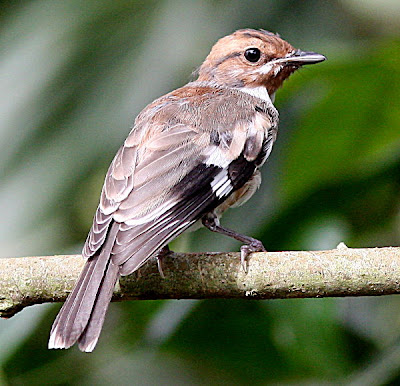 Juvenile White-browed Robin (Poecilodryas superciliosa) on a branch near the lookout knoll at Tyto, no more than 50 metres from a nest site that I watched off and on early in October.

This young bird and another fledged not long after my crawl over green ants in pursuit of a Long-tailed Nightjar. From the day before they left the nest till three days ago - about six weeks - I'd not sighted them.

Yet neither the two juveniles nor their parents could have been far off at any time. Nor is the area densely treed. Some birds and their young have this ability to seemingly disappear, without leaving the breeding locality. Small honeyeaters share the knack.

Willie Wagtails, on the other hand, do not move from the immediate nest zone and dominate their space. There's no denying their breeding and survival supremacy among all the local insect eaters. But few birds can match the Willies' devotion and natural aggression in defence of nest and even mature young.

While on the subject of juveniles' whereabouts, the four young Crimson Finches not long departed from their nest hole in front of the hide now spend their days in Scleria (Razor Grass) 100 metres to the west on an untrafficked (except by me) margin of the main lagoon.

Sadly, the Leaden Flycatchers nesting near the hide seem to have fallen victim to last week's lashing rain. The trim nest sits abandoned. No sign of the birds, or the unknown number of eggs on which they had been sitting. 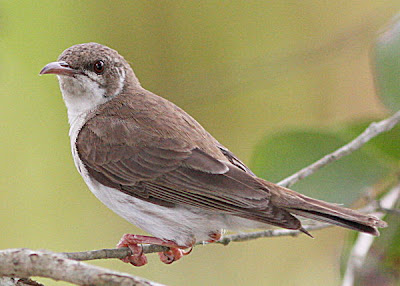 But the Brown-backed Honeyeaters (Ramsayornis modestus) have returned to the hide and are rebuilding the nest they started and abandoned - and which the Rufous-throated Honeyeaters looted. Brown-backeds' nesting habits are certainly erratic.
- December 02, 2008

Weather can bring havoc, and I am not surprised that the Flycatchers lost their nest.
Lovely shot of the Brown-backed HE - even though it is not a colourful bird, the pink toes, and the eye are captured beautifully.
Cheers
Denis

Great photos - as usual! Willy Wagtails are so aggressive and so amusing with it. I watched one early yesterday morning attacking a kookaburra which was peacefully sitting up on the top of an electric light pole - but not for long with the aggression of the wagtail.

Not only quit the nest, they appear to have quit the wetlands. No sign of LFCs anywhere past two days.

It's amusing to watch Willies bouncing off the backs of birds many times their size. Most do move on though - and that's what the Willies want.

Can be counter-productive. Had one charge me head-on several times today. Which tells me to look for an unseen nest.

Makes one wonder if any predatory birds have ever worked this out?

My Willie pair are surprisingly tolerant of me near the nest, probably because we're at close quarters most of the time. They give a bit of a chatter, but are fairly relaxed.