Distant, is what they are

Not a great fan of distant birding. I've never possessed a decent telescope. And far-off birds don't mean a lot when photographed. 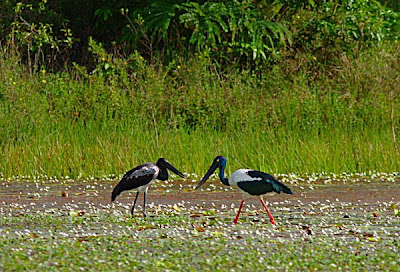 But distant pictures may help tell a story or two. Take these two Black-necked Storks. Carrying across the reed flats yesterday morn came a plaintive little call - to put it unkindly, a whining 'peeee, pee-pee, youoooo'.
I surveyed all likely areas for the 'small bird' source. Nothing. Finally realised it was standing 60 or so metres in front of me. The juvenile Jabiru was begging. Didn't do it any good. The female above marched distantly straight by the youngster and left it to fend for itself. Fair enough, too. It's long past need of babying.
Can't say I've heard the like before. That said, my hearing, though still sharp enough, isn't matched by good aural memory. Bird songs and calls often fool me. 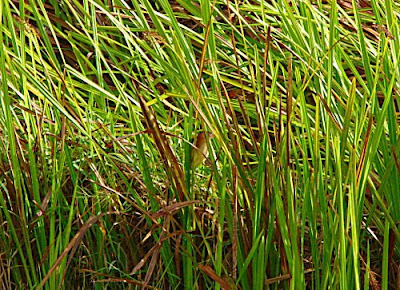 And here's another bird about 60 metres away. It's a male Little Bittern (dead centre: don't strain eyes too much!) at the edge of a Scleria (razor grass) island in the main lagoon at Tyto today.
The bird launched from one island and alighted on another. Four minutes later it flew into grass and weeds on a one-paperbark island. Soon after it flew back into the Scleria. And then it retraced the way it originally came and plonked down out of sight.
Four relatively extended sightings of the chocolatey-custardy back of the bittern, and not a single blurred in-flight shot! It's frustrating, trying to photograph distant bitterns. On the other hand, I've never had a string of four flights before. 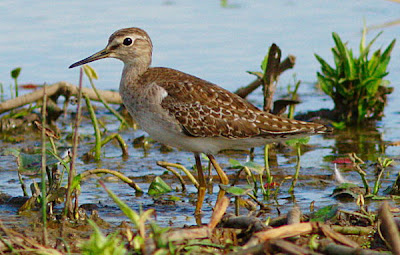 To make up for such long-range views, here's a closer look at a Wood Sandpiper, taken yesterday near the Jabirus, from a distance, but without too much camera shake (shooting at 1/2000sec). The bird was alone, as usual. Most Woods appear to prefer to remain apart from others of their species. Distant, is what they are.
- December 22, 2008

Those are all very interesting sightings - even without the photos you wanted. The Wood Sandpiper is great! I've never seen one down here - but once again maybe I haven't looked in the right place. I do know that I learn something every time I go out.

Love that Wood Sandpiper, Tony. In a coincidence, a Wood Sandpiper was the first wader we scoped with our new Kowa many years ago, it was very approachable and gave us great views, never to be forgotten.

G'day Tony,
Nice one, as usual. Compliments of the season to you and yours. I hope you keep the good entries coming throughout 2009.
Regards,
Gouldiae

Hi Mick,
We're lucky, aren't we, that nature's bounty is well nigh infinite in terms of our lives.
We can learn forever!

Hi Duncan,
In spite of my scoping comments, when I see, say, a cormorant's eye up close at 30x I get envious. Horses for courses, of course.

Woods and some Sharpies are my most obliging waders.

Gidday Gouldiae,
Thank you and festive greetings to you and yours and newly arrived littlies.
I've asked Santa for an upgrade in my camera operator's skill set. We'll see the response in 2009.