Azures see through me 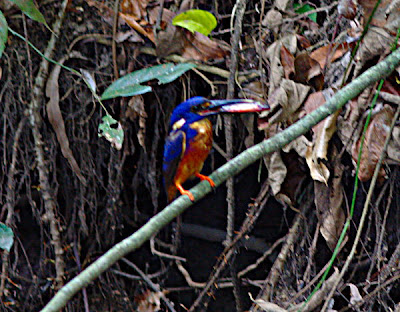 Azure Kingfisher (Alcedo azurea) sits and waits at the oft-mentioned rainforest pool today for the right moment to zoom across and into the nest tunnel.
The birds must have returned to the hole immediately after I stopped haunting the area last month. Heard plenty of their high-pitched in-flight calls as I passed by yesterday. Snuck in today and stood 'hiding' behind a tree about 10 metres from the obscured tunnel entry.
Many more calls. The birds came and went. Fish in bill, they'd perch opposite me, upstream from me, downstream from me, high in trees, low on exposed roots. And never go near the nest tunnel.
I moved further away, lost sight of the tunnel entry, and yearned for Harry Potter's invisibility cloak. Legs started to feel numb.
Just another five minutes. And another five. And another five. And finally one of the birds darted across the water and vanished. Seconds later it reappeared, minus fish.
But that was it. Neither bird would deliver more fish. I felt they did not see me as a threat to themselves, but wouldn't extend grudging trust when it came to possibly revealing the nest site and (probable) 4-6 young. Very sensible parenting.
I'll revisit even more circumspectly in two or three days. 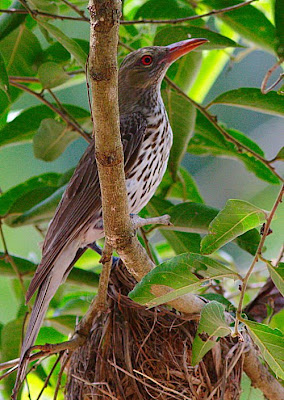 After that terrible picture of bird and fish, here's something a little better. Olive-backed Oriole sits watchfully above a low-slung nest in Tyto's first shady grove of trees. The nest is in plain view just a few metres from the main track.
On the opposite side of the track - and in even plainer view - a pair of White-browed Robin sit, at times, on two green-and-brown speckled eggs. But the birds are so alert, and the nest site so exposed, it's impossible to sneak up on them.
Also frustratingly difficult to pin down, in spite of noisy activity in many spots throughout Tyto, have been several pairs of Pale-vented Bush-Hens, which flew in following rains in mid-November.
Finally, a first since the start of 'winter', a female Cicadabird, on the rainforest fringes today. Though said to be sedentary in northern Australia, the birds - never in great numbers - don't usually stay in or near Tyto beyond May.
- December 07, 2008

Definitely patience required! And maybe a bit of obsessive determination :-)

That's a good sized fish for a little bird.

You do a wonderful job of making us envious of your local birds Tony. Keep it up though!

Hi Mick: Happily in this case I've managed a balance between my obsession and the birds' welfare. Patience, of course, is not always rewarded.

Hi Mosura: Got through withdrawal symptoms yet?

Hi Duncan: The grass is always greener ... but I'm happy to serve the Green-eyed deity.