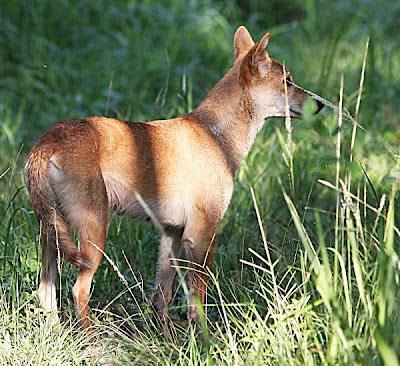 Almost bumped into this dingo (Canis lupus dingo) on a track near the rainforest pools today. She and another larger dingo were standing rock-still and staring intently into some guinea grass and lantana.

They were so fixed on their unknown target I was able to stop the none-too-silent pushbike and grab a couple of pictures without being noticed. Tried to get closer and off they slipped, away from the spot they'd been eyeing so intently and into a handy grove beside the track.

Seconds later, up flew a Pheasant Coucal from the target area. Wouldn't have been much of a breakfast, but it may have had a lucky escape. It didn't stop to thank me.

Not a common sight in and around Tyto, dingos come and go. It's not so unusual to catch them unawares on occasion in less populated places, but I've never come upon two dingos so engrossed and motionless before.

And this on a track used by licit and illicit pig hunters (whose attitudes to protected dingos might not be kindly, to say the least).

In general I've little time for 'sport' hunting and hunters. If I added to the dingos' wariness of humans in today's short encounter I'm happy to have helped their survival.

A great sighting and photos too. I frequently see them down here but NEVER when I have a camera with me, unfortunately!

you certainly have a fabulous environment to do your nature observing. I don't recall seeing dingoes in the Hunter, but I have seen pheasant coucals on the odd occasion closer to the mountains. What a fascinating bird to observe!

G'day Tony,
Another beaut story - thanks. Looks a pretty healthy specimen in the photo.
Gouldiae

A nice pure bred dog by the look of it Tony, the ones we see down here now are virtually all mongrels.

Hi Mick: Have you tried hiding the camera? Then whip it out from behind and outsmart them ;-)

Hi Gaye: Yes, it's rather special. But when the Wet proper sets in I can't reach some of my rainforest spots.

Hi Gouldiae and Duncan: Interesting, your comments on the dingo's condition, and purity of line. Both animals looked in splendid nick. The larger (10-15% bigger than the female and so similar it may have been a male offspring, rather than a mate) was as big and solid as I've seen.

Ingham does have Agile Wallabies in huge numbers, so tucker's never far off!

There used to be several dingoes on JCU's Townsville campus and not so many feral cats. I'm sure that was more than a coincidence.

The balance then tipped the other way. I left in the late 90s. Not sure what it's like now.

Dingoes were also common in the Pallarenda region of Townsville. They would jump up onto the electric barbecues and lick the fat from the cooling hot plates ...

I saw dingos in the distance from the tower hide at the Town Common in '04 and they still came into the 'burbs in drought times. But more people equals more cats, and more hostility against dingos. Sad, really.