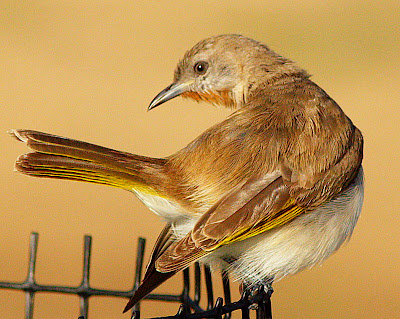 Rufous-throated Honeyeater (Conopophila rufogularis) bathes in the golden haze of morning sunlight at Tyto today against a background of bare earth and perched on plastic mesh protecting a recently planted tree.
Not the usual sort of spot for a Rufous-throated. The birds prefer life in trees and bushes close to the edge of water and out amid lotuses on the lagoon. They compete with Brown-backed Honeyeaters for dangling branches overhanging water and build similar bulky nests.
It's worth remarking on the plastic. Trees planted in the latest revegetation have all been protected by mesh secured to a triangle of wooden stakes. Birds have shown much more liking for the thick mesh as perch than the thin chicken wire previously used. The plastic also bounces back when accidentally knocked by wallabies moving about at night and so better protects young trees.

Sticking close to the water's edge today brought the reward of some time spent watching a male Cotton Pigmy Goose (Nettapus coromandelianus) trying to join a few Green Pigmy Geese (N. pulchellus). Any Cottons are rare on the lagoon and solo males are least likely to appear.
Though not actively hostile, the temporarily resident Greens didn't respond positively to the Cotton's advances, swimming off as the newcomer drew close. It had no better luck with a pair of Pacific Black Ducks. Unless another Cotton turns up within a day or two the male will get the message and seek its own kind elsewhere. 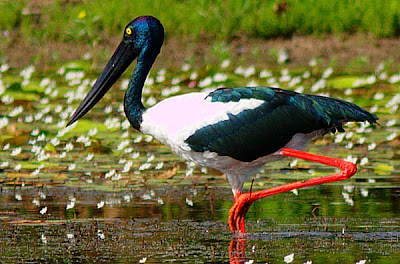 It wasn't the only bird getting a cold shoulder. This female Black-necked Stork marched right by its three begging juveniles. Remarked in previous post about plaintive calling by young bird. Today, all three were at it.
What's odd is that the same birds exhibited no such demands in many weeks leading to the present. And I never saw the parents feed them. Perhaps they fed them at the roost/nest site (somewhere close, but not known to me). Or perhaps it's no easy job learning how to keep such a large body fueled. 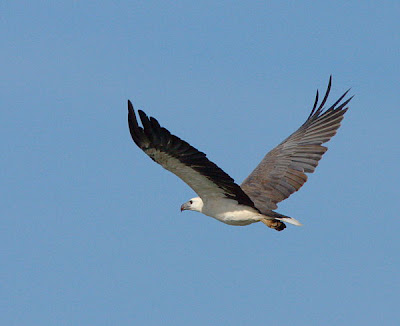 Here's another large body needing plenty of food. This White-bellied Sea-Eagle (Haliaeetus leucogaster) occasionally takes up an early morning spot on a tall eucalypt overlooking the deepest water.
Why I don't know - except as a triumph of optimism over experience (to steal a phrase). The eagles do score a feed in Tyto from time to time, but never in my sight from the water. Nor do they seem to go for dead wallabies.
I suspect its mainly smaller stuff, some even killed by mowers - snakes, turtles, even large insects. Seems a bit demeaning for such a glorious bird, doesn't it?
- December 26, 2008

Hi Tony
I am surprised the Jabiru can hide its nest from your gaze.
Great shot of it stalking along through deep water.
I cannot imagine the noise that 3 large babies could make.
Denis

I meant to say, ... wonderful Sea Eagle photo, by the way.
Denis

Those first two lines are almost poetic Tony, are we seeing a new blogging phase developing? ;-)

If only I could get that close to a
Black-necked Stork! So far they have kept at the far side of the bay.

I suspect the rufous and gold led to a bit of purple. Tend more to occasional haiku (Basho's my guy) and nonsense jingles (Dr Seuss). If pushed, admit to lapping up verse novels (Dorothy Porter, a sad loss! and Les Murray's Fredy Neptune). Puns, and poetry, might be two much.

Stork was about 40 metres away and I got just the one okay shot of 10-12 in the burst. Birds will usually walk off rather than fly if approached slowly, specially if there's deep water between bird and photographer. A kayaker may be more acceptable than a walker. And all things come to they that wait!