Red tails in the sunset 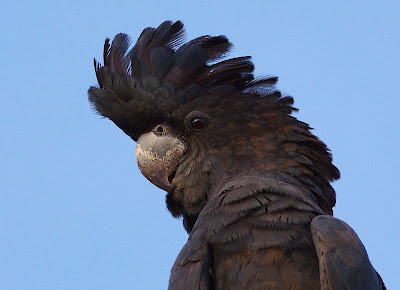 A small flock of Red-tailed Black Cockatoos (Calyptorhynchus banksii) has graced the caravan park over the past week. The birds are drawn to Indian almond trees. More exactly, to the tough, fibrous fruit. Above, a male flourishes its crest in late afternoon light. The birds have two feeding strategies. Pluck the almonds and eat them while perched in the tree. Or litter the ground beneath the tree with branches bearing the almonds and descend to eat them. A female (above) makes light of ripping into a tough green almond.
Either way, feeding is accompanied by companionable chat conducted in hoarse squawks. Full volume alarm screeches can make the birds somewhat less lovable.
Once the almonds have been stripped from the trees the cockatoos will move on, usually toward the beaches, where they can find more almonds and also tuck into casuarina nuts. Less often, they tackle green pine cones in the district's forestry plantations. 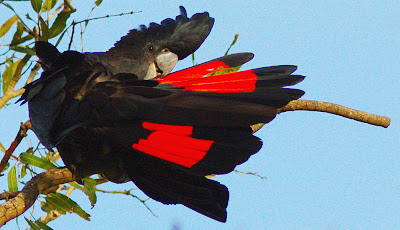 Hard to catch the birds' coloured tail panels in flight, but this male showed off 'reddily' while preening late this afternoon.
- January 23, 2009

"Showed of Reddily"? Oh please!!!
.
Great photos.
.
I was surprised to see the reference to Almonds, but then realised you were saying "Indian Almonds". Do you know what genus they are?
Cheers
Denis
PS check for an email from me about Birds in Backards - they want photos of Red-backed Wrens, and you're the guy for that!

Destructive, and messy - but beautiful birds! Great photos too.

Cockies are always great value Tony, nice to see the Red-tailed. Like the blog title!

Don't have almond genus to hand - and brain won't recall. I'll let you know. Got email and will offer any pix they want, just wish had males of higher quality and 'killer' pose.

Such beautiful destroyers, unlike the species that destroyed much of their old habitat.

G'day Tony,
Thanks for my breakfast menu today - puns and pictures to die for. I'm now off to work with a grin and a mental image of that beautiful bird.
Regards,
Gouldiae

Happy to help a happy worker.