Rainbow Lorikeet over the top 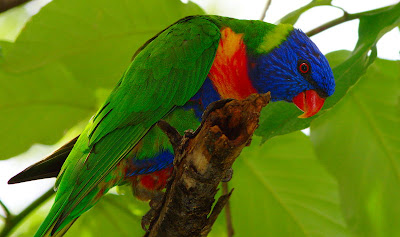 A problem with Rainbow Lorikeets (Trichoglossus haematodus) is the temptation to crank up saturation to psychedelic levels. But the colours are dazzling enough, there's no need to go over the top.
Nobody told this bird (click pic to enlarge) about not going over the top. Came upon it bouncing on a dead stump of branch in Tyto this week. The bird kept mouthing and 'licking' a leaf of the tree. Couldn't see any insect life at all on the leaf. Nor was the bird biting chunks out of the leaf.
Rather, it seemed the bird might be drawing something 'chemically interesting' from the ragged edge of the leaf. After each mouthing/lick it would bounce up and down on the branch, then throw its head vigorously left and right. Licking, bouncing, head tossing. Bouncing, licking, head tossing. And so on for more than 10 minutes. A few random screeches and a bit of chattering added to the colourful encounter.
A few other Rainbows then turned up, but landed in a nearby Euodia. They paid no heed to the bouncing bird and it showed no interest in them. But it gave me a last screech and took off. Hard to be sure, but it may have been joined in departure flight by the newcomers.
I have absolutely no idea what the episode was all about. Took a tentative taste of leaf. Nothing. No taste, smell, reaction of any sort. Never seen any lorikeets in the tree before, nor any other birds acting oddly.
Am trying to nail ID for tree. Don't hold your breath! (Feb 6: hope you didn't hold breath! Tree is 'Alphitonia excelsa, commonly known as the Red Ash or Soap Tree, is a species of tree in the Rhamnaceae family. It is endemic to Australia, being found in New South Wales, Queensland, Northern Territory and the northeastern tip of Western Australia. It is used in bush regeneration as a pioneer species and for amenity planting.' Thanks, Wiki, and Greg Calvert, who told me name, which I forgot.) 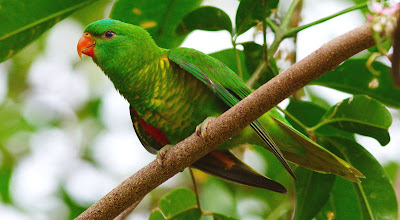 While on the subject of lorikeets, here's a holdover Scaly-breasted (T. chlorolepidotus) from an earlier post, for comparison between the closely related species.
- January 27, 2009

You've probably hit upon something there. I have seen a cat get completely off its face on "Catnip". Sounds like this tree has something which did it for this bird.
Great colour - probably intensified because the bird was in the shade.
Great images.
Denis

What facinating bird behaviour! It would be great if you could find out more somehow.

G'day Tony,
Odd behaviour indeed. Might have been just clowning around. They seem to do a lot of that around here - we sometimes call them 'clown parrots'. You didn't bob up and down after your lick did you?
Regards
Gouldiae

Hi Denis: Colour is as close to true and natural as I could get.

Hi Jenny: We live in hope always, don't we?

Hi Gouldiae: Most clowning I've seen has been in company with others. Even I seldom clown alone, but I admit it's often with only birds or animals as witness ;-)

I've been trying to think of a smart comment re. you and "funny foliage" Tony, but I can't. We'll be keeping a close eye on your posts from now on though, you'd better have photos of any rare bird you tell us you've seen. ;-)

You've got me! Can't trust those of us who are mostly vegetarian and go around munching leaves. There have been reports of an odd old bird prowling about the wetlands ... but I think they mean me. :-((