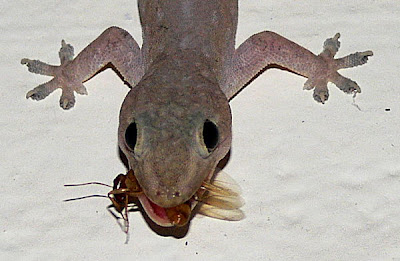 Asian House Gecko (Hemidactylus frenatus) looks rather pleased with this night capture of unidentified prey. Hard to dislike anything so attractive, though they have taken over from native geckos throughout all Queensland coastal suburbia, and the Northern Territory. Makes one wonder if Cane Toads would be so detested had they been blessed with some natural beauty. 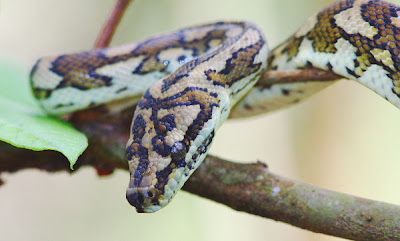 Blessed with great good looks, yet often the victims of irrational fear, Carpet Pythons (in this case Morelia spilota mcdowelli) often make an appearance after rain. Found this feisty one-metre snake sprawled along a guava branch in Tyto yesterday.
Alarm calls from Yellow, Brown and Brown-backed Honeyeaters led me to the python. It always pays to check on any noisy gathering of more than two species of bird. There's usually a predator of some sort hanging around. Literally, in the case of pythons, which like to hang poised above pathways used by animal prey. 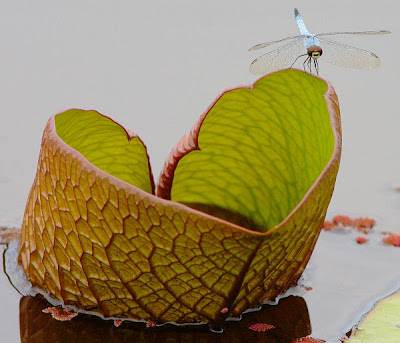 Change of pace and space with a Bluedragonfly (? species) on a lotus leaf unusually curled to show its underside colour and patterning. Intended to try for a series of insects using this leaf but 30 hours of rain and showers had by yesterday morning lifted Tyto's lagoons to gentle fullness and trickling outflow. The leaf went under early on.
The outflow through a meandering creek - and, more swiftly, by way of a northern bypass channel - brings a rush of small fish swimming against the tide. They strive to reach flooded grasslands through temporary creeklets and also plastic culverts which feed water into the lagoon system.
In turn, the fish draw egrets, herons and bitterns to the shallow flows where the fish are most vulnerable. The limited numbers of fish here and there yesterday were lucky. Apparently the birds hadn't caught up with the latest fishing reports. Not even a Black Bittern I caught distant sight of three days back. But they'll all be here soon, trust me!
- January 06, 2009

The lotus leaf and dragonfly photo is stunning! The gecko - cute - and the snake - I'll give it a miss!

Gidday and thanks, Mick and Denis:

So, in the stunning stakes, one's nyet is another man's python!

Cheers Duncan. My only insect guide has printed O. cal. in pale grey and includes no popular names. Neglected to mention in post the attractive leaf belongs to blue lotus. Nature was giving me a clue, had I but known it.