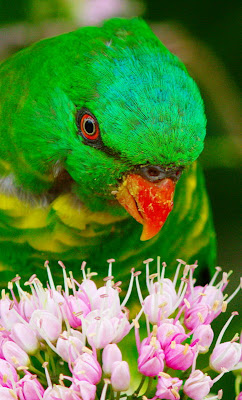 A Scaly-breasted Lorikeet (Trichoglossus chlorolepidotus) tucks in to Euodia (commonly, Evodia) flowers during an extended feeding spell in Tyto yesterday. The bird's partner shot off early on. Expecting the pictured bird to do likewise, I rattled off several quick bursts. Then, we settled down: the lorikeet to enjoy foraging; me to stay close for a chat. 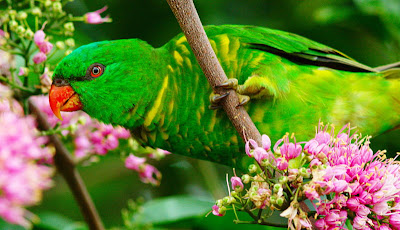 There's always a fly or two in the (app)ointment however. Birdwatcher first and photographer second, and engrossed in the chat, I failed to change camera settings to take advantage of improving light. So, pictures noisy and suffering for lack of tripod - back in car and put aside in favour of umbrella.
Rather appropriate, being in two minds about what to set out with, then having extended chat with a bird that itself often seems in two minds. Smaller and plainer than Rainbow Lorikeets (T. haematodus), Scalys give the impression they would be amazed to be told they were not Rainbows. 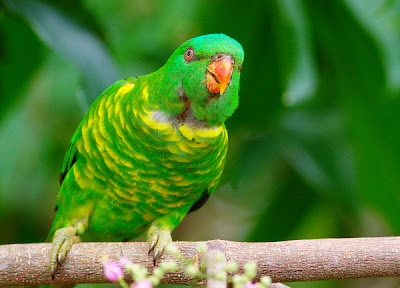 I'm sure they think themselves merely a little less colourful. And though their smaller relative size leaves them open to bullying, it's no surprise that aviary escapees in Melbourne and elsewhere are said to readily find Rainbow and other lorikeet breeding partners. (But I cannot remember ever seeing any intermediate forms.)
- January 18, 2009

Can I reply in kind, with thanks and no misogyny intended?

I've not seen the Scaly-breasted Lorikeets right around here - but the Euodia was flowering down on the bay-side yesterday. (Post and photos to come when I get a few more names sorted out!)