Shining light in the shadows 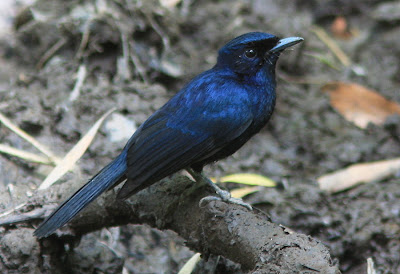 Shifted the morning round to nearby rainforest for part of this week. Found both Little and Azure Kingfishers along shadowed creek and caught flashing glimpse of Noisy Pitta. But only the Shining Flycatcher above obliged by hanging about for a few minutes. Picture not helped by skies clouded by that southern dust! Meantime, this female Shining has stayed near Tyto's now last creek pool for about two months. 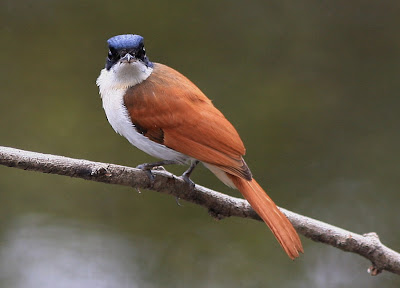 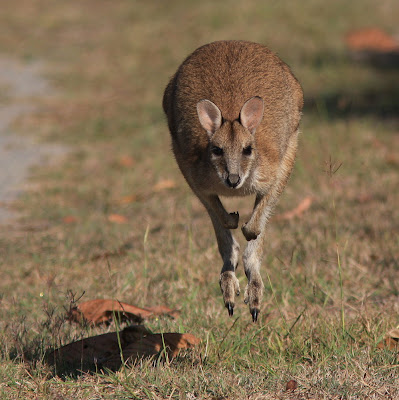 Change of pace with a couple of Agile Wallaby images. Caught above animal on the hop along the northern boundary track at the wetlands. Missed the startled reaction springing from seeing me astride bicycle in middle of path, and sideways launch into long grass. 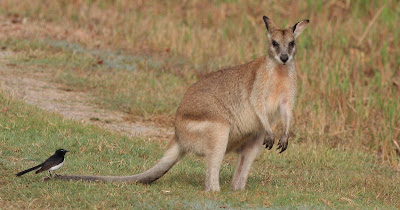 Not much of an anchor! Willie Wagtails usually take up a higher position on their living perch and watch for prey. 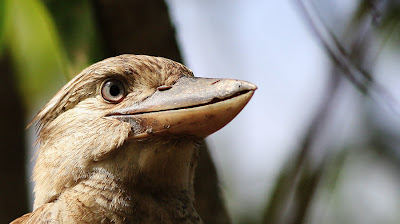 Talking of watching, Blue-winged Kookaburra glared briefly at me but chose not to fly off as the gap between us narrowed. Looks as if it's bitten on something rather hard and incurred bit of bill damage. Chewing on rhino beetles perhaps?
- September 25, 2009

Lovely Shining Flycatchers Tony; they are one of my many favourites and they do indeed light up the shadows.

Thanks Barbara. Still hoping to catch one closeup in better light.

The female Shining Flycatchsr is a stunning image, Tony.
Makes up for our "southern dust" dullness of the male.
Great action shot of the Agile Wallaby. Perfect.
The Willy shot is very comical.
Nice post. Cheered me up no end.
Thanks
Denis

Great shots as per usual. You say the Wagtail is perching. I say he caught himself a big meal. Can't blame him for wanting a change from bugs and insects :)

Hi Denis: Thanks and, as they say, Cheers, mate!