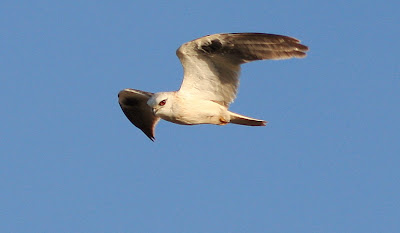 Enjoyed three decent raptor moments lately. Caught the above Black-shouldered Kite (Elanus axillaris) just south of Tyto in the late afternoon. Lack of strong eye colour and generally 'dirty' colouring suggests a young bird. Not a rare raptor though only a sometime sighting in Tyto as they prefer cruising over open land in search of small prey such as mice. 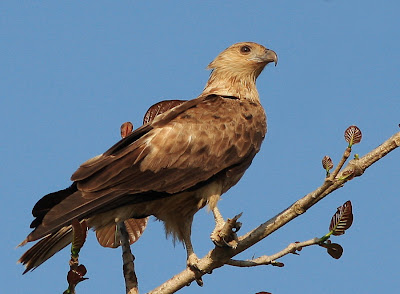 Whistling Kite (Haliastur sphenurus) looks out from Leichhardt tree in Tyto after displacing a Yellow Oriole. Kites have been showing more than usual interest in the wetlands for two weeks, possibly related to several Agile Wallaby deaths (some bodies reveal dog attacks; most do not: kites rarely seen on the carcases, relying, it seems, on dogs or pigs to scatter morsels). 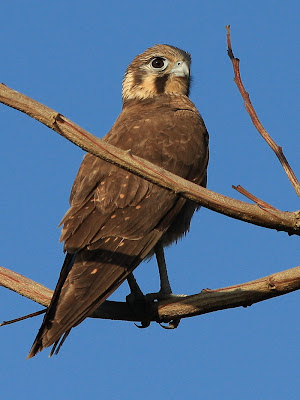 A major burnoff behind the airstrip to the south of the wetlands drew this Brown Falcon (Falco berigora) in to share the spoils with assorted kites. The falcon - which would usually be found sitting on power lines by sugar cane fields - has stuck near Tyto for about a month, presumably picking off prey from among the regenerating grasses.
- September 14, 2009

Good selection of raptors Tony. I also admired your Brolga pic in the previous post. Glad to hear you have some good news about your knee so we'll all be able to keep enjoying your photography!

Hi Tony
I only discovered your blog the other day and it has had me captivated for many hours. I am an ex kiwi and have lived on the Gold Coast for 30 years. This weekend my husband and I are flying up to Townsville to spend a few days at Lucinda. After discovering your blog I plan on spending a day exploring the Tyto Wetlands. I would really like to be able to find a Cassowary so I also plan a trip to Wallaman Falls. Would you have any other suggestions or any tips for good sightings at Tyto? I absolutely love Kingfishers.
Sandra Broom

Hi Barbara: Thanks. Yes, knee's behaving for now. Be under test soon as I start venturing out on the reed flats. Six Sharpies today, but too far off.

Gidday broomee: Been a bit breezy out Lucinda way. But most welcome relief from the 30C days. Cassowary hunt around Ingham not so easy. Known male in Wallaman Falls area. But it's no sure thing. Best to be first up the road of a morning and hope bird is wandering about near the top section (where you'll see a metalled track off to the left: worth a quick walk!).
Tyto still home to plenty of Forest Kingfishers. But Azures and Littles have gone, and Sacreds seen, if at all, mainly near track marking northwest boundary.
But Spotless and White-browed Crakes active. Usual lots of Crimson Finches. Plenty of White-browed Robins. And small waders starting to drop in. Good luck!