Brolga catches my eye and dragonfly 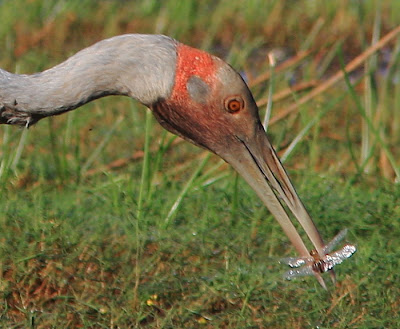 Took subsidised health trip 110km south yesterday to Townsville to have orthopaedics consultant tell me I have one of the best bum knees he's seen. Just keep riding the bicycle for hours of daily birding and buy glucosamine, if the mood takes. Pre-dawn start before the good news bought five hours in the Town Common, a birders' magnet. Highlight photographically was a Brolga (Grus rubicunda) snapping up unidentifiable dragonfly. 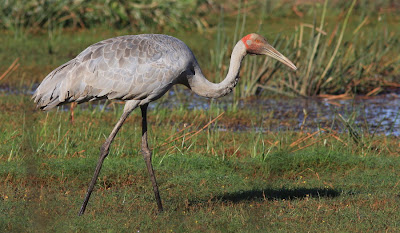 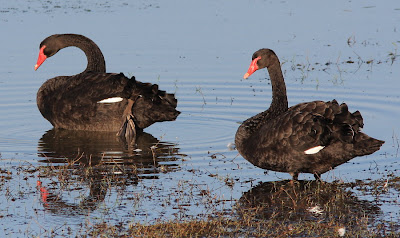 Regulars to the Common - which is undergoing extensive planned understorey burning - are currently listing more than 60 species, so I ended well down with just 52 birds for the morning - most of them too distant or high for the camera. The above Black Swans (Cygnus atratus) became the only other shot worth processing.
Two wildlife encounters yielding no usable pictures were a close-up two-step with a particularly stroppy little Red-bellied Black Snake and a Brown Goshawk smashing at speed into a thorny thicket in a vain effort to nail a Bar-shouldered Dove. The snake eventually dived down a hole. The goshawk shook itself free of the thorns and sped off through the trees.
- September 12, 2009

Great photo of the Brolga - which I have yet to even see :-( Look after that knee! I would hate to loose your photos and posts!!

Hi Mick: Thanks. Was good to see the Brolgas. Only ever honk overhead at Tyto as they travel to and from the tablelands. (Also saw Bustards but at distance).

Thanks Gallicissa: Unlucky dragonfly, I'd add. Shouldn't think Brolgas would take too many swift-flying insects.