Honeyeaters not half tricky 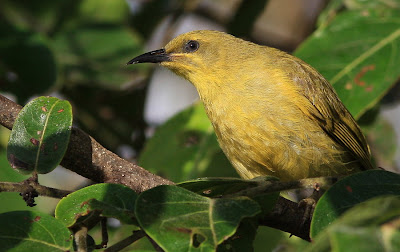 Chasing after Yellow Honeyeaters (Lichenostomus flavus) lately brought a half decent image (or, if you prefer, a decent half image). The task appears simple when the birds begin breeding (about two months ago). Not so. The cup nests are all secreted high in outer leafy branches. Once building stops, the birds near the nest more or less vanish. And in several weeks I saw just one fledgling at close range. 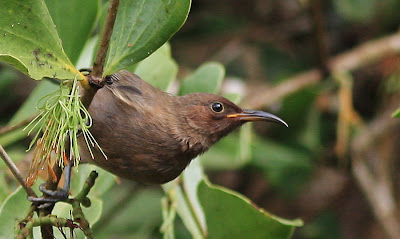 Even trickier to get pictures of Dusky Honeyeaters (Myzomela obscura). They disappear for months before their somewhat squeaky high calls - often in mistletoes - announce a return. From where, I know not. 'Sedentary. Locally nomadic,' say the guide books. About now is their prime breeding time. Can't recall ever seeing signs of such in Tyto. And above bird looks immature. 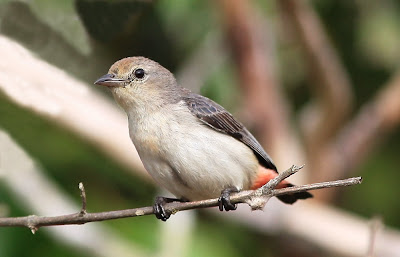 And so to Mistletoebird (Dicaeum hirundinaceum), a female. Plentiful for some months, they have become harder to find recently as the dry season takes hold. It's likely the pickings are sweeter and life cooler at slightly greater altitude in the nearby ranges. 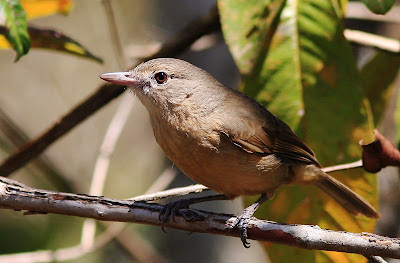 Staying faithful to its territory - and completing this set of 'birds on sticks' - Little Shrike-Thrush (Colluricincla megarhyncha). One day the trees are full of them. The next, no sight and little sound. Odd, considering they use a wider range of calls than any other species in Tyto. But it would be boring if nature became too predictable, wouldn't it?
- September 22, 2009

Hi Tony
The Dusky HE is an unusual one. Seems to be a different shape from most HEs.
Cheers
Denis

Hi Denis: Think it's just a trick of pose and angle. In general not much shape diff between Brown and Dusky.