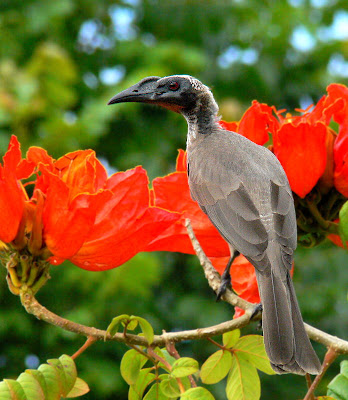 Blue skies! Ingham scored an after-flood break today, starting with light cloud and quickly turning mostly to blue sky and fast-drying sunshine. Second major cleanup at the caravan park almost done. Time to think birds. But no time from water blasting and mopping up to get any photographs.
So here's a splash of colour saved from early this year (and a message): Helmeted Friarbird (Philemon buseroides) part-ringed by African tulip tree flowers. The bird's a vocally varied goody, the tree's an infesting pest.
'African tulip tree (Spathodea campanulata) is a fast-growing evergreen tree native to tropical Africa. African tulip tree is a Class 3 declared plant under Queensland legislation. Non-invasive native alternatives to the African tulip tree are black bean (Castanospermum australe), wheel of fire (Stenocarpus sinuatus) and flame tree (Brachychiton acerifolius).' (Qld govt site).
Just another of a long list of totally unsuitable plants introduced to Australia, often by people who should have known better. Plenty of concern even 100 years back about thoughtless imports. (Not sure too much has changed.)
Most Tyto visitors love the tulip trees, and few show great enthusiasm for mainland Australia's largest honeyeater, no matter how many pleasing short calls (I've just spent 30 minutes seeking apt onomatopoeic formations  - and failed entirely) it makes.
Here's the real rub. Those big bare black faces are just made to dive deeply into flowers such as the tulip tree's. As with many pest species, the trees lead friars and other birds to conspire against native revegetation.
Suddenly the picture above seems less sunny, doesn't it?
- February 10, 2009

G'day Tony,
Nice observation - the ugly native and the attractive invader.
Note call, Pizzey and Knight says - "Loud, varied: 'poor devil', repeated; many complex calls...'chillanc', 'chank', 'whack-a-where'", etc. Any of those close?
Glad you are drying out. It's been a long process.
Regards,
Gouldiae

Hi Tony.
Celebrating with bright colours I see.
After dominating the ABC News for 10 days straight, Ingham will surely drop off the nation's consciousness soon.
Glad the flood levels are dropping now.
Glad you didn't get too drenched.
Cheers
Denis

what a beautiful image to start off my day. Thank you.

Your bright and cheery nature in the face of such difficult times is admirable. I am thinking of you and your community as the heartbreaking task of the clean up continues.

I wish places that sell plants and trees were a little more careful about what they suggest people should plant. There's so many known invasive species still being sold.

Chank you for trying, Gouldiae. But most of those don't apply, though chank comes closest.

We at the park have been lucky, Denis. Some will be cleaning up for months. It's a cruel irony that fire is cleansing and flooding is filthy.

Just blessed with a perverse sense of black humour and of my own unimportance, Gaye. The flip side is, of course, a sense of everyone else's unimportance!

You're so right, Mick. On which subject, Brisbane's fire ant invasion was the work of a garden supplier close to the port. Turned out many people were aware of the bitey little buggers long before alarm turned to near panic.

Although we loved our visit to Tyto we clearly remember the infestation of Spathodea campanulata. We still occasionally find a Spathodea that has snuck in to our rainforest pretending to be a native until it gives itself away by producing that flower. We grow a huge diversity of native trees .... I think I'll start posting some photos of spectacular native flowers now! Although I mightn't be able to take a photo with a bird posing so nicely.

Me too, Duncan. Didn't get many Littles in past few months, but Helmeteds always here.

Right idea, Barbara. Show people native beauties and educate them against the exotics. Tougher job convincing the birds, or getting them to pose!

Hi Tony we had 1 African Tulip Tree in our yard and it soon went when we found out what it was.

Good on you. More than enough exotics on the Sunshine Coast and hinterland.