Even the finches are cleaning up 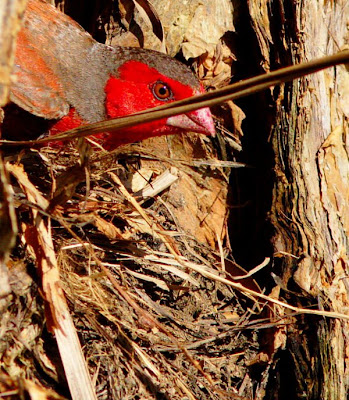 Ingham cleanup continued today in steamy hot sunshine. Did a squelchy tour of Tyto and found remarkably little flood debris considering up to three metres of water poured in and sat over almost everything twice in a few days.
Not only the townsfolk engaged in getting all back in order. Crimson Finches are busy renovating the nest in a paperbark trunk (above) in front of the hide. May not be the same pair as produced four young in November and then another batch of unknown number from a nest in a fork slightly higher in the same tree.
Some useful material to hand is coming not from the second and now vacant nest but from the third of the Brown-backed Honeyeater nests in the second of the paperbarks fronting the hide. Finding white feathers to line the nest won't be so easy. Old ones have all been flushed away and few Magpie Geese have stayed near the flooded lagoons.
No egrets, herons, cormorants, darters, and few ducks. But Comb-crested Jacanas and White-browed Crakes were out in small numbers, and noisily busy out of sight. One Black Bittern, highlight of the morning, and mistaken for debris as I surveyed a messy outflow from main lagoon to side pool.
But plenty of chirpy activity in the trees, led by the honeyeaters, doves, woodswallows, wagtails, Metallic Starlings, orioles, figbirds and cuckoo-shrikes. No raptors, few lorikeets, no sight or sound of cisticolas or grassbirds. In all, 35 bird species, plus a few wallabies (many drownings in district) and turtles. No snakes.
The total debris cleanup for Tyto's 120+ hectares will take two men with a small truck and boat about half a day, less time than for many a stricken individual household. Even better, there is nothing that cannot wait. Three metres of water? Been and gone. And it has put a temporary damper on the rampant Pink Lotuses. No worries!
- February 12, 2009

According to a friend in Cairns, the snakes are all up at her place!

Plenty washed up in town homes too, Snail. Friend told me yest he almost grabbed a brown by accident on his basement work bench.
No crocs. Think some reported Ingham sightings were dodgy. But not so awfully wrong as the dengue news stories. There is no dengue in Ingham.

Hi Tony
Lovely image of the Crimson Finch. Interesting story of how the tropical creatures and people cope with the clean-up.
Good to hear Tyto is nearly back to normal, and Ingham.
Denis

Thanks Mick. It is interesting watching how systems bounce back.

G'day Tony,
You certainly can pull the birds!
Glad to hear you've got some sunshine and drying out a bit.
Gouldiae

Sun by day, rain by night. Not too bad, but nothing's drying out very quickly.