Not quite up to the mind's eye 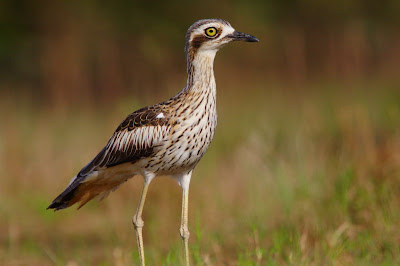 Best laid plans . . . ! Rain overnight put paid to crawling up on Bush Stone-Curlews today. Yesterday's back-numbing effort didn't quite do the trick. Bird walked towards me as I lay down and got so close I couldn't fit all the legs in, and  - propped on elbows - couldn't regrip camera in steady position for a vertical shot. As it is, picture's a bit soft, and back still aches. Pity, as the background is as I wanted. 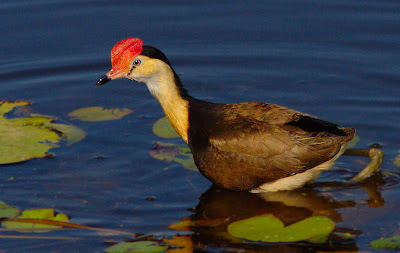 Comb-crested Jacana was casting perfect reflections on still water reflecting the blue-sky morning yesterday - till I stepped forward at the lookout knoll. The bird stayed close, but never got into the desirable position on the lotuses leaves and stalks. However, while waiting in vain for something better I spotted the first Little Bittern I've seen since January 22, flying between Scleria islands. 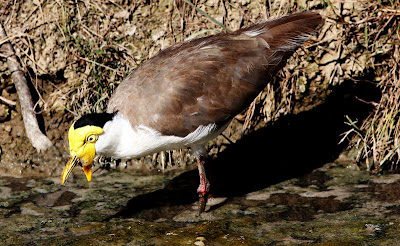 Masked Lapwing, from a few weeks back, looked spectacular in late afternoon light as it poked about in a drainage ditch. And the back plumage is striking. But even after cloning some messy background, and selective sharpening, the bird's head refuses to stand out as it did when first sighted. Though pictures may well be worth a thousand words, they frequently fall short of the image in the mind's eye.
- February 22, 2009

Maybe no feet but still a striking picture Tony

I agree with Duncan. Besides, if it were as perfect as you wanted - what would you have to look forward to tomorrow?

Hi Duncan and thanks.

Hi Mick: Never short of things to perfect. Life's like that!

Hi Tony
You are at risk of being called an "Obsessive", you know.
That Bush Stone Curlew is great.
Cheers
Denis

Even though the legs are cut off the background is perfect as it shows up the bird so well, sorry to hear about your back. A pair of Bush Stone Curlew bred successfully for two successive years in our orchard area and Allen found the only way he could get close enough for a photo was to sit on the mower with the engine going! This year their efforts at breeding have been thwarted by an Amethystine python which we just happened to see one evening in the orchard with very obvious egg-shaped bulge. And we fear the snake has repeated the performance with subsequent eggs laid.

Hi Barbara: Pythons and birds have been going at it for thousands of years. I'd look on and enjoy the contest, noting that BSCs probably eat small snakes.

I have been visiting often and as usual a great set of photos.
Great variety in your part of the world.

Hi Andy: Thanks for visiting. The spice of life is seldom lacking around here.