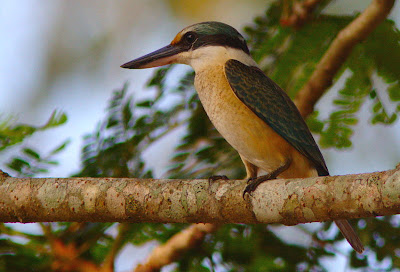 Still no worthwhile flight picture of a Sacred Kingfisher, in spite of another hour chasing three of them in Tyto today. Consolation prize is the rather painterly image above. Just an ordinary shot, post-processed normally. But the bird is so perfectly groomed it looks to me rather like a fussy watercolour. 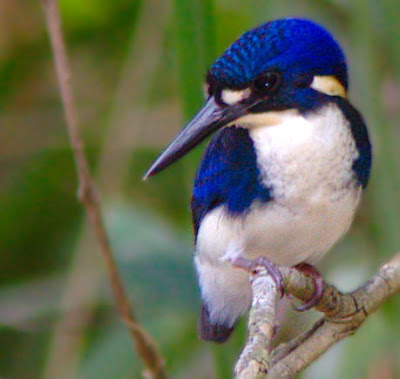 Couldn't get near this Little Kingfisher as it worked the edges of a large creek pool today. With luck there'll be plenty of chances to get closer to the newcomer in coming days. The bird's quick-fire dives for tiny fish show that some clarity is emerging near the surface of the silt-laden waters. 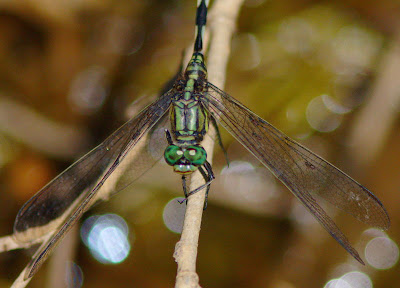 Think this dragonfly is Austrogomphus prasinus. Not showing this just to boast of hand-holding 672mm= lens at two metres, nor to attract Duncan's attention to one of his beloved odos. No, no, no. Look closely at that lovable face. Remind you of a notable politician? A. johnhowardus? Or am I seeing things?
- February 20, 2009

Great photos again. Isn't it strange that sometimes birds look perfect - just as in the books - but most of the time they seem to be grooming feathers, fluffing them out, and definitely looking less than perfect!

G'day Tony,
I love that first shot. The plumage looks like it was done with brush strokes - very nice.
Gouldiae

Hi Mick: It is paradoxical that photographs of birds seldom are so helpful as field guide drawings when IDing birds. My 'flat' photo is the sort of exception proving the rule.

Hi Gouldiae: Indeed. It's differently better than I first thought. Might work on it a bit more.

You're not seeing things! LOL.