Sacreds the devil to catch in flight 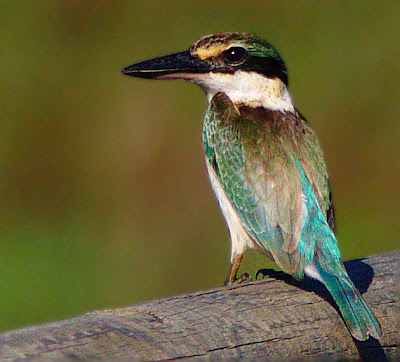 Spent an hour today trying to catch Sacred Kingfishers (Toditamphus sanctus) in flight or on sodden open woodland ground as they pounced on small insects and reptiles. No success. Birds proved almost impossible to anticipate and were typically wary when I moved to unobscured positions. 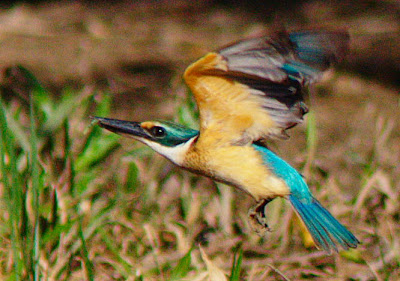 This flight shot is offered as much in frustration as explication. There is something in the bird's bill, possibly a caterpillar, but I couldn't get close enough or steady enough for a satisfying picture. The Sacreds' numbers are building, however, so we'll have another go tomorrow. 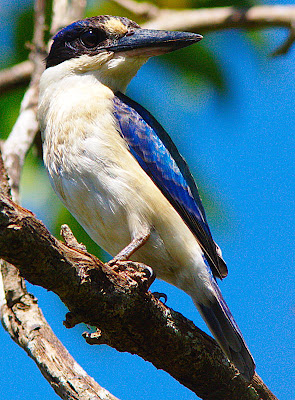 Surprisingly, Forest Kingfishers (Todiramphus macleayii) have yet to dominate the pickings from the swampy grasslands and woodlands. But soon they'll be lining up like a blue and white army on fences and in trees and elbowing the Sacreds out of the picture. Six or so Sacreds will give way to 30-50 Forests. 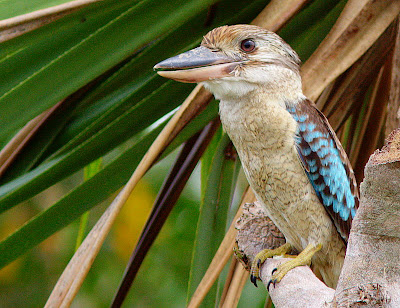 Hard to elbow a Blue-winged Kookaburra (Dacelo leachii) out of the way, though Willie Wagtails often try. Flood or drought, one or two pairs of Blue-wingeds maintain a quiet presence in Tyto's trees. This female allowed me close a few days ago. She completes the present set because there have been no recent sightings of Little Kingfishers, and the sole Azure seen has been but a high-speed blur.
- February 18, 2009

Sacred Kingfishers are some of my favourite birds. I posted about a road killed one, a while back.

You have captured the colour on the rump beautifully.

The Forest Kingfishers are prettier, I admit, but I really loved your second image there tonight.

I look forward to your image capture of a Little!
You have done the Azure, beautifully before, from memory.

A nice series of birds - even it you didn't get all you wanted!

A beaut set Tony, it must be great to have all those kingfishers to watch.
You did well to catch that one in flight, they don't hang about.

Hi Denis: The beauty of most kingfishers is very dependent on direct sunlight, Sacreds more so than the others. I love 'em all. Didn't have any better luck today.

For almost a decade in Scotland I tried in vain to see a kingfisher. Now I seem to be repeating history here in Tasmania.

Gidday Mosura: Two more for you in latest post.