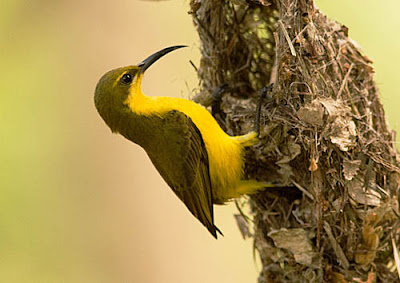 Nectarinia jugularis's opinion of this chopping and changing isn't known. But on the little bird's behalf may I protest the latest downplaying of the gorgeous dominant yellow in favour of the ho-hum workaday olive. To say nothing of the male's splendid iridescent blue-black bib. 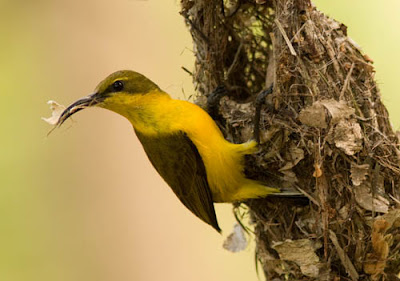 Came upon this female building in a shadowy grove today. Typical dangling structure hanging from a tiny twig. (Sunbirds can be encouraged to build from strings hung from sheltered verandas.) She stopped work soon after my arrival, so I pushed off. 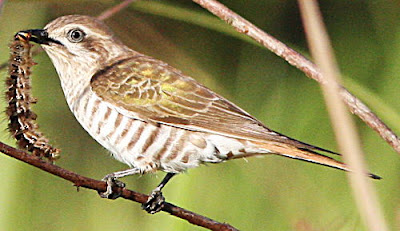 Earlier, I chased after a Horsfield's Cuckoo (Chrysococcyx basalis) hoping to get close as it dealt with a large caterpillar. Cuckoos are usually more interested in preparing and downing large catches than flying away from birdos. This bird was less willing to be photographed close up. 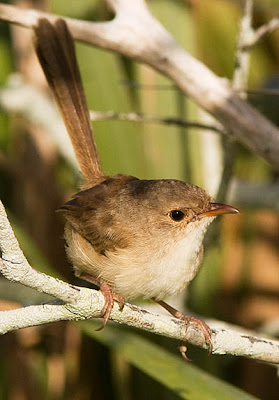 Not so, this Red-backed Fairy-Wren (Malurus melanocephalus). Sat on branch and almost begged to be snapped. Facing left, looking down, facing right. But one is enough. Why can't the rare ones co-operate similarly?

Boring bit starts here! Quick word on species counts. Got 57 in six hours yesterday and 59 in five hours today; 13 from yesterday unseen today; 15 from today unseen yesterday. It's an indication of how greatly lists can vary. Also, that there are fewer birds than in any of the last few months, when 65 or so would have been the count.

Hi Tony
Amazing species counts - and that's "low"?
Great photos of the Sun-bird and Cuckoo particularly. I once watched a Magpie skin a hairy caterpillar, by rubbing its hairs off along a tree root, before eating it. So, I hope your Cuckoo did something similar.
As for taxonomists, and their name-changes, the less said the better.
Cheers.
Denis

72 species over 2 days doesn't sound too boring to me.

Cuckoos of course eat caterpillars other birds don't touch. Same large ones are barely bruised, others can get up to eight minutes of thrash and bash and be oozing pulpily from both ends of their hairy skin before being swallowed in a gulp.

High or low, the count never bores me. But you know what they say about books: one graph halves sales. Bit the same with birding: a few figures and eyes start to glaze.

You should see the ones that get away!