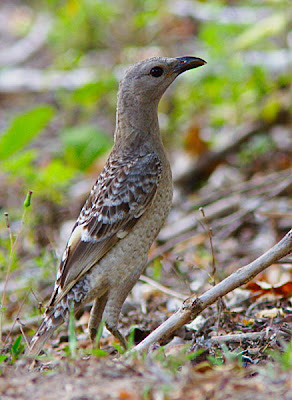 Rhinoceros Beetles (Xylotrupes gideon) are more rainforest and moister woodland inhabitants. But they get around and are not unusual finds by night (alive) and day (dead or dying) in cities and suburbia right down the east coast to Sydney.

So today's male Rhino was a bit unlucky to be grabbed from a small patch of vine thicket by a visiting Great Bowerbird. The beetles are an imposing size (up to 40mm) and though harmless can take an amazingly secure grip on flesh or feathers using their spiny legs. They squeak defensively sometimes.

Heard no squeaks today but noticed the extreme care the bird showed in dealing with the beetle. Fast grab and fast, violent release. Another grab, another release. The beetle was given no time to catch hold of the bird.

Something had to give. Bits of beetle legs proved vulnerable. Unfortunately once the legs were devoured the bird no longer feared the beetle. Off it flew, beetle in bill, into the distance. I can only guess that more thrash and bash would eventually break down the Rhino.

Just can't imagine the bird eating that hard horn - even as an aphrodisiac. Only some humans are capable of such delusions!

What a cunning bowerbird. I remember that once those beetles latch on, they're difficult to dislodge.

When I lived in Townsville, I remember investigating an awful racket coming from the back veranda. An ambitious green tree frog had taken on a male rhinoceros beetle. The beetle was hissing away and the frog was squealing because the beetle had dug in. They eventually sorted it out.

Hi Snail,
Tree frogs have big eyes and even bigger mouths. Both sometimes seem to get them into trouble, don't they? It's also interesting their defences - 'barking' and sitting tight - against, say, a snake are even less effective than a beetle's.

Interesting story Tony, with good photos to illustrate.
Comments informative too, both of you. Thanks
Denis

Very interesting photos and post. I sure wouldn't want one of those beetles digging in!

That would have to be uncomfortable going down if swallowed whole.

I remember seeing photos of a bird which had swallowed something that ate it's way back out of the bird. Unfortunately I can't remember what the something was.

Hard to imagine anything surviving a bird's potent digestive system, so I guess it lodged in the throat. Among 600,000 beetles there must be a toothy, strong-jawed Jonah?

Hi Tony and Mosura
I prefer to think of it as a Mac The Knife Beetle, which cuts its way out of the birds body.