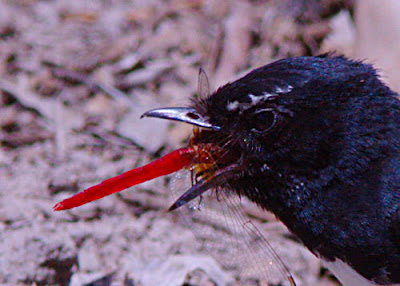 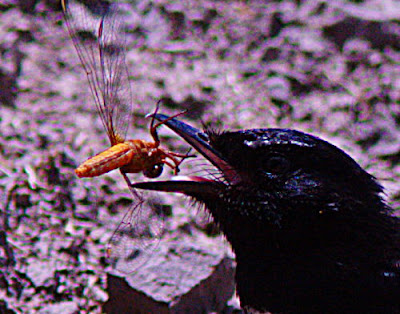 First take your dragonfly.
Fast pounce will do the trick.
Shake vigorously by the wings.
Discard the unwanted wings.
Pick up dragonfly by the head.
Gulp three or four times and swallow.
Bad morning for dragonflies. These two captures came in less than three minutes. The Willie Wagtails have young to feed and Willies are excellent parents.
But such large prey cannot be presented whole. So the birds were in no hurry to race off to the nearby nest, in a paperbark hard by the Tyto hide. As I left the dragonflies were under further attack.
The red: Diplacodes haematodes. The other: unknown.
- November 03, 2008

Great catches (by the Willies) and by you.
A very good set of photos.

Duncan might be upset, as he is very fond of Damsels and Dragons.

Great photos showing the Wagtails in action on the insects. You really captured the moment!

Good ones Tony, hope the chicks didn't choke on those big servings.

Gidday all and thanks.

Don't think the youngsters saw any part of these catches, Duncan.

I don't like to use the word wow too often but I this is a fitting occasions so, WOW!

I understand there were two dragonflies but were there two wagtails involved or one greedy one?

A pair of Willies, Mosura. Their nest with two thriving young is on a paperbark bough within touching distance if one stretches out and up from the hide.