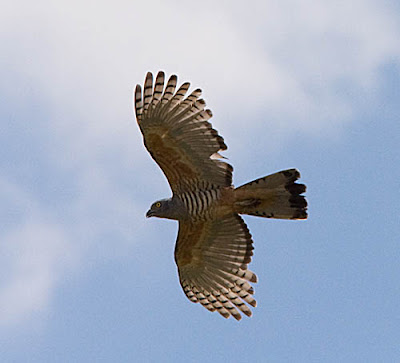 Pacific Baza (Aviceda subcristata) circles at a distance above me near Tyto's western boundary today. Hours before I had a tantalising glimpse of what appeared in the early morning light to be an oddly white and grey raptor carrying some small leggy prey.
The later sighting of a Baza - with a Willie Wagtail bouncing off its back - almost certainly clarified the question. Probably one of what proved to be a pair of Bazas, and equally probably the prey would have been a tree frog.
Bazas do love big juicy tree frogs, and crunchy mantids. So much so they'll sometimes fling themselves at outer foliage to see what shakes. Don't see much of the behaviour in Tyto, the trees in the main neither suiting nor rewarding such extreme foraging.
Nor are the birds that occasionally drop into the wetlands as unconcerned by human presence as they can be elsewhere, particularly in and near coastal settlements.
In the Daintree I've seen small flocks chatting (rather like New Zealand's Keas) as they fly between offshore roosts and mainland feeding areas. But never more than a pair, or an adult plus a juvenile (parent birds seem to split up and look after one juvenile apiece) around Ingham. 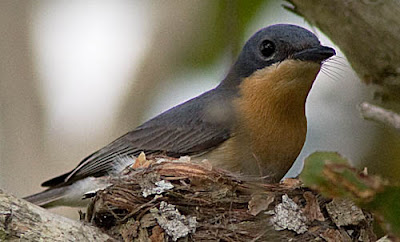 Female Leaden Flycatcher checks the nest for shape today. The birds were nowhere to be seen for most of the morning. Only when I was getting down for a sneaky crawl to try for close-up shots of Green Pigmy Geese in water just behind the nest tree did the female appear clutching nest material. Since yesterday the nest has grown and shows bits of bark added to it.
- November 16, 2008

The Baza is a great bird to get a shot of, as clearly as that.
I have only ever seen one, sitting high in a tree, near Coffs Harbour, NSW.
Cheers
Denis

I like the photos of the Leaden Flycatchers and nest. I think I can see some additions on the second nest photo. It will be interesting to see what they make of it in the end. The Baza would be a new bird for me.

The Baza's a bird I'd love to see too Tony, beautiful raptor. Shots like yours with the light coming through the plumage are great. Beauty of the leaden, their nests are neat little works of art, hope they have success. Haven't managed to get out to our flycatcher hotspot yet, soon hopefully, we get leaden and satin in the same gully.

Don't get either of those down here. Great pics. Love that nest!

Bazas probably sneak a bit more south than Coffs. Warming may encourage them further down the coast.

I'll give the LFCs a wee spell and post the finished nest with an update later on.

Yes, the Baza at least got itself in the right part of sky for the pic, though not willing to sit for me.

Good luck with FCs. We see only Leadens (1 Restless in 5 years!)

So many nests are things of beauty. Yet, surrounded by natural ornament we produce so much that's ugly. What a perverse species!

G'day Tony,
Love the shot of the Leaden Flycatcher on that beautiful nest. And a Baza, strewth you get some wonderful birds up there - envy, envy, envy!
Keep 'em coming.
Gouldiae

Will do, Gouldiae, will do!