Martins get the message 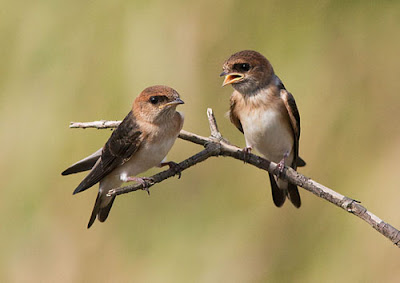 You don't think they could have forgotten about us, do you?

Juvenile Fairy Martins (Hirundo ariel) don't look too happy at the lack of service from their parents at Tyto yesterday. With good reason.

No food or obvious parent turned up in the 15 mintues or so I watched. The youngsters seemed finally to get the message and set about doing a bit of hawking for themselves. 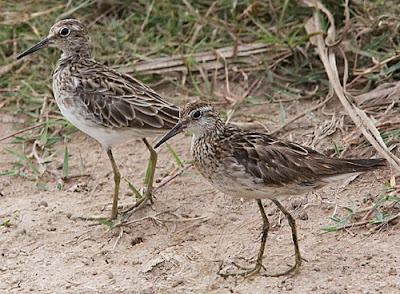 This pair of Sharp-tailed Sandpipers (Calidris acuminata) near some mill treatment ponds appeared more content. Flocks of Sharpies have been much smaller this season and other waders sometimes seen in small numbers have not shown up at all.

I've been chasing one markedly dark bird, without much success in getting close enough to absolutely satisfy myself that it is a melanistic Sharp-tailed. It sometimes stands apart from the other birds and seldom joins flock flights. The behaviour is puzzling. But then waders often puzzle me.

There are few to ID at Tyto now. The reed shallows reached a tipping point as temperatures soared last week. Suddenly, shortage of shallows. Over the last three days scarcely a wader to be found - apart from three Latham's Snipe (Gallinardo hardwickii).

So, too deep when most of the migrants were passing through. Too dry to attract any strays. Looks like being a low wader species count this season. Just have to hope for a Yellow Wagtail before Christmas. 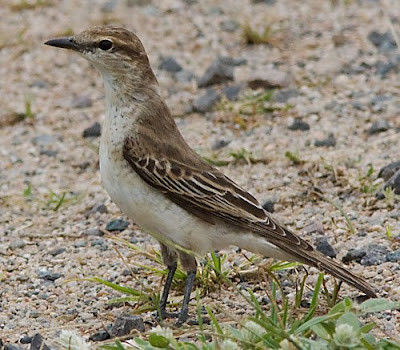 And hope it hops close to me, as did this White-winged Triller (Lalage sueurii) today as I rode home through an industrial estate. Wish more birds were so open!

Sorry for the lack of water in the wetlands. SE Qld got more rain over the week-end - don't know if it gets up as far as you from down here. The photos are great - I especially like the STSP.

We've still got plenty of water, Mick. Any to spare should go south!

Nice interpretation of the situation of the Fairy Martins. I like your story telling (as well as your photos).
Cheers
Denis

Gidday Denis: The story flows more easily when the pictures do a full 1000 words!

Hi Duncan: Now if only I can sharpen my technique to match my lens.

That Martin on the right looks decidedly worried. All wonderful photos as usual.

I haven't done much bird photography lately. I'm sitting at my desk right now listening to Black Cockies but every time I go outside they are nowhere to be seen. I have the camera set up and ready to go.

Local Red-tailed Blacks haven't dropped in to van park lately. (Always overfly Tyto.) Gloriously messy but fussy feeders! And now flocks of 5-8 where once in 100s. :-(