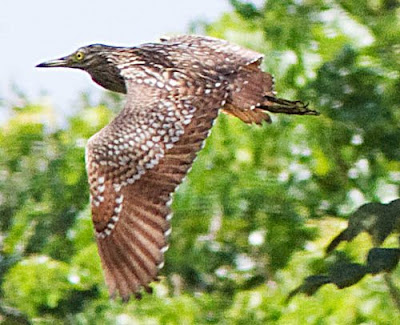 Luck's been spotty with birds spotted in the distance. Didn't even know the Nankeen Night Heron (Nycticorax caledonicus) disappearing fast from view at Tyto today was a spotty juvenile till I downloaded the images. From distance the bird looked a somewhat drab adult. 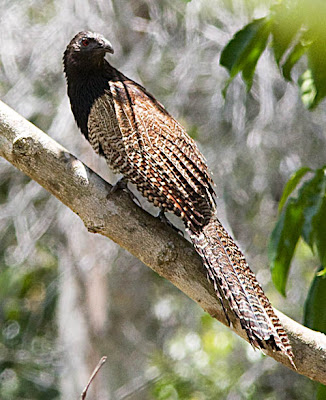 Pheasant Coucal (Centropus phasianinus), in black and brown breeding plumage, is more streaked than spotted, and more often spotted running along the ground looking - as in Judith Wright's marvellous set of bird poems - like a granny tripping along tiptoe with skirts up.
Difficult to catch these crafty birds in clear view, on boughs or in the air. They almost invariably clamber high within a tree and launch themselves out the other side away from perceived danger. Their flight is not so clumsy as often described.
Though from the cuckoo family, it's hard to see much about them that other cuckoos would admire. Pheasant Coucals build their own ground nests, incubate the eggs, feed the young, and generally behave like good bird parents.
If they stopped eating other birds' eggs and young all would be happy. I guess they won't and will continue to be mobbed as relentlessly as, say, Blue-winged Kookaburras and Little Eagles.

Spotted close to the long-deserted nest, the quicksilver pair of Lovely Fairy-Wrens. As ever, they flashed across a track, spent a split-second in lantana close to their decaying nest, and disappeared into thick tangles of more lantana and guavas. But I will get them! 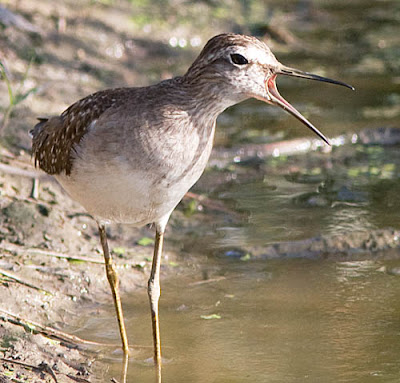 Also spotted from distance - and genuinely spotty - this Wood Sandpiper (Tringa glareola), at the mill treatment ponds yesterday evening. We played a wee game of see-if-the-photographer-falls-in-the-scum-chasing-the-bird-beside-the-pond - and declared it a 0-0 draw: no top shots of bird, no muddy feet for me. Meantime, the mystery dark sandpiper of last week was nowhere to be seen. 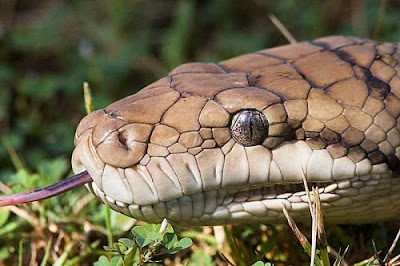 And here's a biggie to finish. The best-conditioned, thickest Amethyst Python (Morelia amethistina) I've yet seen in Tyto. About 3.5 metres of muscular, shimmering gorgeousness, so heavy it left deep grooves in the shortish wet grass. Perfection! Until it came to keeping its tongue in frame and itself out in the open.

What do you say to an almost 12-foot snake as it goes by? So long! What else could you say?

Spot you later, as they say.


An afterword: Problems with downloading pictures, formats that kept changing, and supposedly lost internet connections added at least an hour to posting this blog. Do others strike similar posts or days? It's maddening to space everything perfectly, introduce another image and find spacing's gone haywire and font and type size has changed. Happens whether I paste stuff in or enter it directly.
- November 12, 2008

Hi Tony
Great photos, esp the head shot of the Python. Definitely one creature to be polite to.
Sandpiper shot cries out for a sound file to be embedded, doesn't it?
Re Blogger problems - I sometimes find that, but not often. I do knnow it behaves differently with different Browsers. I prefer Firefox. Blogger seems to behave more predictably with it. Also, blogger can have its own problems (in head office). One noight last week, it was awfully slow, and pictures would only show as html in the composing stage. (Preview worked OK). But that was a nightmare, as i was having to position a bunch of text, where I wanted the photo to be.
Your Template seems set OK to show photos in "large" size, which at least means you do not have the problem of positioning text beside photos. That is a nightmare.
Lets hope it is a temporary problem.

If not, try a different browser, to see if that helps.

I upload photos, after I have composed text, then, in Firefox I can right click "cut" on the photo I want to use first, and scroll to the appropriate area of text and right click "Paste". That does not work in Internet Explorer. I find you have to drag the photos, which is always a problem.

But if you are a Mac person, then that advice maybe will not work either.

Appearances can be deceptive. The sandpiper was actually yawning, not calling. Embedding sound and video would mean carrying vidcam. Not an option until I'm in a wheelchair, I fear. And for those of us stuck with Telstra's "fast" wireless broadband, the buffering delays are infuriating.

I gave up trying to juggle pix and text side by side early on. Even with best of templates it didn't work. I am aware some templates are buggier. My previews, for example, differ greatly a lot from final blog.

Wonderful photo of the sandpiper. I don't think I have ever seen one down here. The snake you can keep!

Nice entry Tony,
Love the snake head shot and the Sandpiper.
Re the blog - I do exactly what Denis does. I use Firefox, paste the text from Word, change the font, upload the pics in large format, then cut and paste them into position. Haven't really had any problems so far, but I'm a raw beginner at this.
Regards,
Gouldiae

Interesting post, Love the Coucal and the snake shots.

It took me ages to post yesterday. I made a html table in a text editor for all those moths pics. When I pasted it into blogger It worked but you had to scroll down through several pages of white space before you could see the photos. I eventually figured out you have to remove all the line breaks in the html code.

Fantastic work, Tony. Enjoyed all your posts this month.
Your new camera seems to be working a treat.

I used to see an occasional Wood at Boondall Wetlands, almost always by itself, and never at nearby Nudgee Beach. Probably one or two tucked away inshore up and down the east coast.

Seems I should go back to Firefox. If only it was easier to shift Favourites and Autofill etc :-(

I wondered how you had coped with all those moths. But at least you've got it nailed for next time. I knock out all formatting when trouble apears - and the problems persist. Seems it's a combination of image file and image drag glitches.

Yes, I'm getting a bit lopsided with weight on right shoulder but it's a small price to pay ;-)