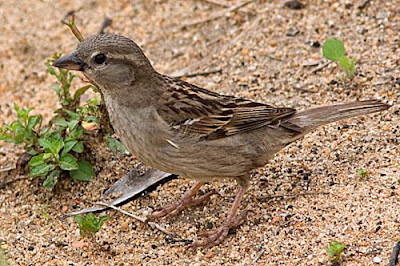 Don't laugh. This is a rare bird once you've gone more than 100 metres west from Tyto's eastern boundary and carpark. Plenty of House Sparrows (Passer domesticus) in the carpark trees and nearby suburbia.
The above female made it all the way (about 250m) to the edge of the first lagoon. Looked very out of place pottering about among the sparse weeds at the water's edge. Not for nothing are they called House Sparrows.
Further in today it was more a case of gone than out of place. Rain and wind overnight further reduced numbers on the main lagoon and reed flats. No spoonbills, ibises, egrets, and fewer ducks and Magpie Geese.
Fruitless chase at the western boundary for pictures of a busy Dollarbird. But it hawked from a series of tallish trees and the sullen grey sky made perched and in-flight pictures nigh impossible.
And no sign in the same general area of the Lovely Fairy-Wrens, which popped up again for a second yesterday and vanished just as quickly. Frustrating! 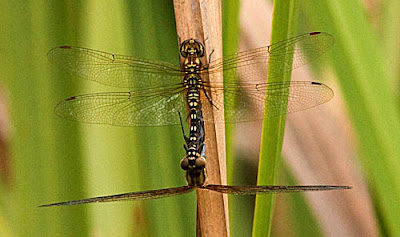 On a positive note, one for the dragonfly brigade. Casually watching these two biggies, I saw them couple in midair with an audible 'snap', weave about for a second and settle on a blade of Scleria. Channel in way, so picture from 10 metres not super sharp. ID for others - or till borrower returns 'my' library guides.
- November 19, 2008

Hi Tony.
Interesting angle on the Dragonflies.
Sparrow - I hope it continues to feel out of place there. In some part of the continent, the story is that they are reducing in numbers.
Cheers
Denis

No shortage of sparrows at my place unfortunately. Nice shot of the dragons.

Looks like one of the tigertails Tony, probably need a bit more detail for a positive ID.

Hi Denis: Seems sparrows might be doing it tough in much of Europe. I've seen a suggestion they're mega-suburbia's mine canaries.

Hi Mosura: Better pray for the sparrows. As commensals they must beat the rodents?

Hi Duncan: I'll just have to get my own copy of more field guides!