Cracking start to the day for young and old 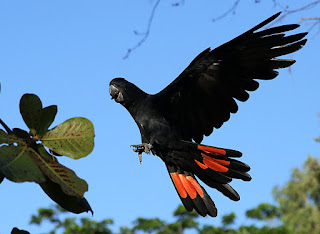 Red-tailed Black Cockatoos can't get enough Casuarina (she-oak) nuts some mornings, cracking into them and digging out the tasty seed within. Other days they fly on by, usually from south to north. But the more common fare is Sea Almonds. Male bird above quitting Casuarina (twiggy background) and preparing for landing amid the almonds. 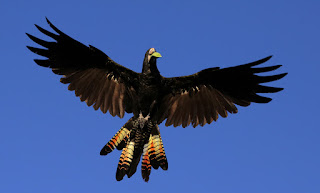 Female carries green almond away. the birds seldom wait for the fruit to turn a ripe purple. And often chomp and tear away the flesh from one end only before moving on to another. The reward for persisting through to cracking the almond pod (stone) open is a single small seed. I guessthe birds must get some sustenance from the green fruit fibres. 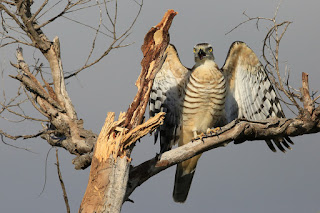 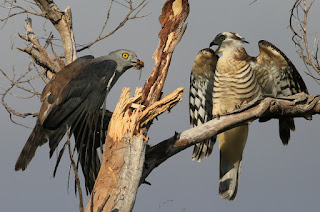 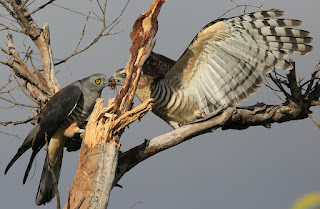 Easier to see where the sustenance comes from for this young Pacific Baza, getting excited by the approach of food-bearing parent. Another of the seeming never-ending cicada supply. So many still in trees you'd think the youngster, one of a pair being fed by both parents yesterday near the Town Common gate, would be able to grab some for itself. 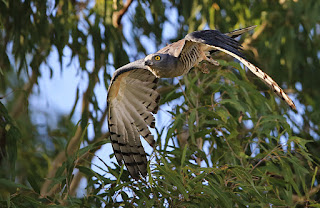 But no, that's what the oldies are for. Hop to it, Ma or Pa! 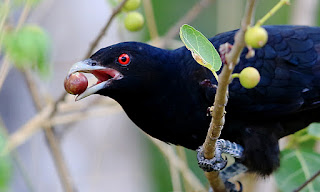 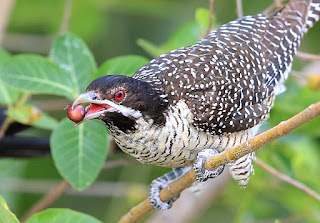 Meanwhile, as their offspring may be eating something meaty courtesy of deceived parents, Eastern Koel pair tuck into figs, a leisurely life free from the burden of babycare. Koels are, like most cuckoos, lucky: they take the kids back around the equivalent of human teen time. No dramas. Off they go. Happy as. Or, at least, so it seems. Can't see that ever ending happily among us. Though, some parents ... and some teens ... maybe???