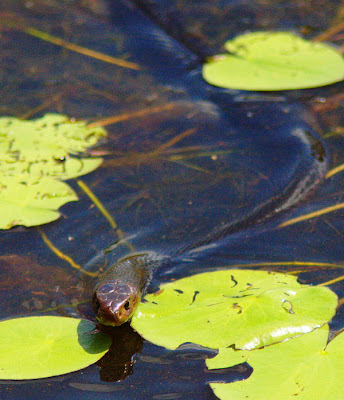 Just when I begin to think most of the snakes have been washed away, this Taipan (Oxyuranus scutellatus) comes swimming briskly from the Scleria and hauls ashore close by the footbridge to the Tyto hide. 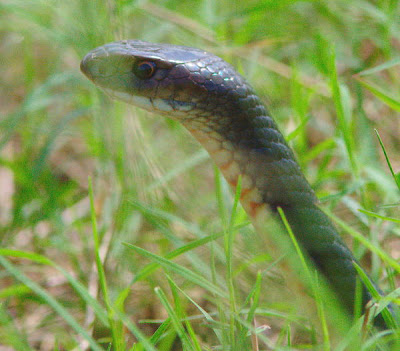 I stepped across to its likely route up through the grass and got near, but the species is ever alert. Couldn't get unobscured shot of the raised head. Moved a little too much, and snake slipped quickly away into knee-high weeds. 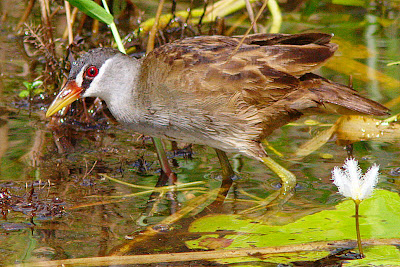 Taipans are often active hunters by day. Not so often encountered in the water. This was the first I've seen coming from the flooded razor grass. Not sure that this one-metre snake could cope with a fullgrown water rat, so one of its targets could be this White-browed Crake (Ixobrychus minutus) photographed later in front of the hide. Crake eggs or chicks probably in very short supply after the whole system went under twice in the floods.
An observation on snakes and reported sizes. Most snakes appear to grow with each retelling of sightings. Discarded skins are little help, because they stretch greatly. Swimming snakes always look considerably bigger and longer than when out of water. I know this and yet still had to revise my first estimate of the above snake down by 30 centimetres. Little wonder 'huge pythons' were once so common. 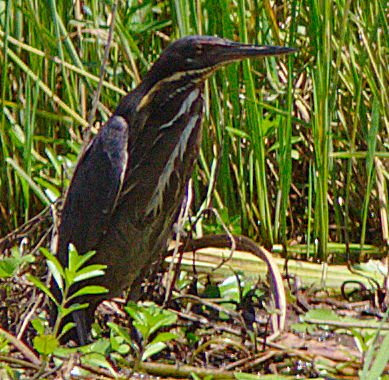 Here's an unlikely meal for any passing python. However this Black Bittern (Ixobrychus flavicollis) stood almost motionless for more than half an hour today directly in front of the lookout knoll. It had presumably been there for much longer, unnoticed by some camera-toting visitors who I spotted from afar but who left before I reached the knoll. Cameras are no substitute for a decent pair of binoculars. 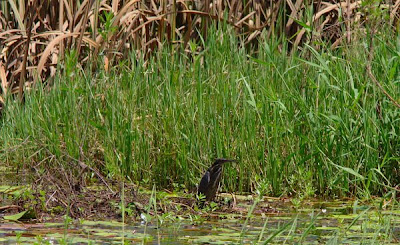 That first picture is great! They're all good, but really like the first one.

Hi Tony
Nice Taipan.
Just the name is enough for me. Their reputation precedes them. Probably at least as exaggerated as the size reports, as you mentioned. You could easily have convinced me it was 2 metres long.
Denis

Hi Tony, great photos of the crake and bittern - the snake swimming is a beautiful photo but I wouldn't want to be that close!

Thanks Pet Snakes. Guess Taipans don't feature too often within your followers.

Hi Mick: I was pleased with the crake, which is a heavy crop, though not taken from so far away as was the bittern.

Hi Neil: Thanks. Love 'my' snakes, but at safe distance!

Wonderful photos Tony - I particularly enjoyed your description of the Taipan as the only 'Taipan' stories we hear from the local farmers in our area describe them as vicious, aggressive etc. (probably because said farmer has been trying to kill the snake!) It is particularly enjoyable to read an appreciative description. We love 'our' snakes but I have never seen a Taipan here and I think I would keep a very safe distance if I did.

Hi Barbara; 'Safe' distance varies with the viewer. Mine is about two snake lengths for venomous, closer for others. And I never forget that snakes' reaction times are 10 times faster than mine!

Great angle on the first shot of the Taipan. Is that taken the the bridge you mentioned?

Gidday Mosura: First shot taken looking NE from 3.5m above, inside hide. Got nothing useful side-on to snake from the footbridge. Raised-head shot taken looking N and standing above and about 3m from snake after guessing at its passage up to grass-topped little knoll from which bridge links to hide.

Be careful with a snake like that Tony, mightn't be real big but it could give you a nasty suck!

No worries Duncan. I've a deal with them. Write good things, and they'll not bite. Besides, they tell me hairy legs taste awful.