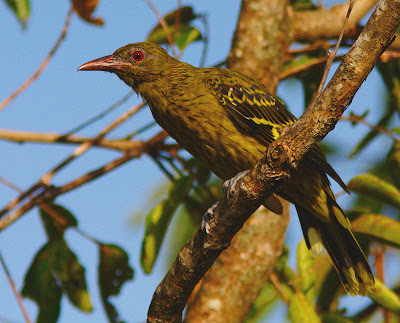 A balanced diet is the way to good health, we're told (though many choose to ignore such maxims and indulge in maximums). No need to sell the message to the Yellow Oriole (Oriolus flavocinctus).
Watched today as the bird below snagged a large hairy caterpillar, gave it the typical cuckoo-like thrash and bash treatment for at least two minutes and gulped the bruised mass down. 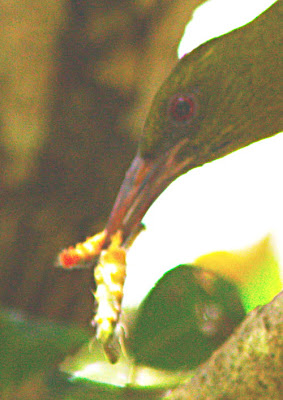 It then moved on to fruit, more customary fare. The bird tried several ripening guavas before finding one already part-eaten and to its liking.
Most birds avoid hairy caterpillars, leaving them to the cuckoos. Orioles are fruit eaters and though they seem to relish some insects I've not previously seen one tackle any hairy 'monsters'. Perhaps the cuckoos get there first most of the time.
Will get a chance to study Yellow Oriole eating habits more closely in coming weeks after seeing one in the early stages of nest building near the lookout today. Should mean plenty of resounding 'yonk yonk a-lonks' and breezy wheezy 'sneezes' to come. 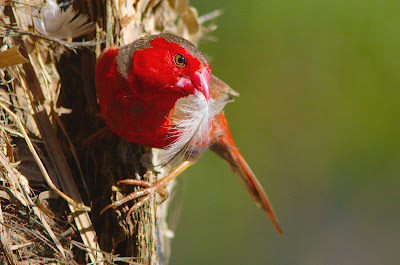 And news of the Crimson Finch nest in the trunk of a paperbark in front of the hide. Two outsiders turned up today. One ventured near the nest. Out rushed a female furious at having her sitting interrupted. The interlopers fled. It's been about two weeks since final feather-bedding (above) activity, so fledging is probably a week off. I'll be on watch!
- March 24, 2009

Very interesting observations about the oriole's eating habits - and the photo is great. Look forward to more pics of the finch.

Hi Tony
Great shot of the Crimson Finch.
.
Re hairy caterpillars, I once saw a Magpie spend 5 minutes cleaning every hair off a Caterpillar, before eating what was left.
I was impressed with its determination. You are probably right that they are not "usual fare" for most birds.
Didn't know the Cuckoos were Caterpillar specialists. Very interesting.
Cheers
Denis