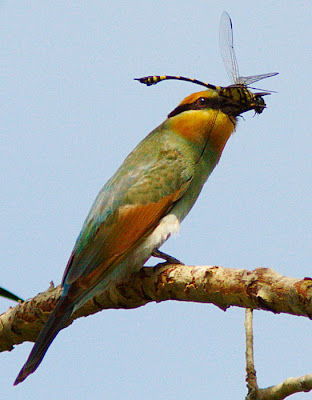 Another dragonfly comes to a colourful end in Tyto today. Haven't observed great numbers of such large prey being taken by Rainbow Bee-eaters. Dragonflies are usually too quick and alert. But not this one.
Also surprising was the speed with which the bird swallowed the dragonfly. No thrashing against ground or branch to remove the wings, which Willie Wagtails and some other insectivores reject. No, rather like an egret with a fish, the bird speedily manouevred the dragonfly into a head-first position inside its bill. Three fast gulps and it was gone, wings and all.
Bit like the bee-eaters themselves. In past years there have often been flocks of 50-60 birds bursting from the paperbarks in a gorgeous explosion of hues. No sign of such numbers and spectacle in recent months. Most often these days three or four birds appear briefly and just as quickly vanish.
Pulling an even faster vanishing trick today were a pair of White-browed Crake chicks. Saw the two for a split second in front of the hide before an alarm call from a parent bird brought instant disappearance by the small black youngsters. Too quick for any pictures.
Almost impossibly quick also is their production. Their habitat was totally under water five and again four weeks ago. Incubation is about 21 days. It's certain many crakes' nests were flooded. Twice in a week. But some must have laid again immediately the waters dropped. 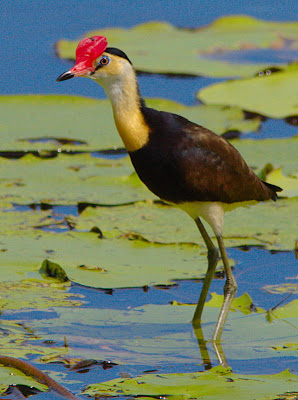 Little wonder Tyto's chock-full of crakes year-round. I suspect the Comb-crested Jacanas are equally swift to recover from a bit of excess water. But that's just a quick observation as excuse to run another Jacana picture. Still trying to get really close!
- March 08, 2009

Tony - What a fabulous photo of the Bee-eater with its catch - the colours of the Bee-eater are captured very well in that light. Your description of the catch being consumed also very interesting. I have just been out in the swamp with camera trying in vain to capture an image of a Dragonfly we haven't identified yet. There are many different species in flight today feeding on the myriad insects in the air - wonderful to watch but too hard to photograph.

Hi Barbara: Some dragons and damsels seem harder to capture than others. But patience - as always - usually pays off. And luckily down here the mozzies have been almost entirely washed out!

Beautiful photos and lovely blue sky! We could do with some down here.

Hi Mick: Hang on in there and the blue skies will be back.

G'day Tony,
Yep, I enjoyed the Bee Eater pic too.
Nice to hear about the breeding resuming after those floods. Thank goodness for their resilience hey?
Regards,
Gouldiae

Hi Gouldiae: A few thousand years of just getting on with it! If we'd stayed as hunter-gatherers such speedy recovery would be within our grasp. Of course, we wouldn't be commenting thus ;-)