Of a cockatoo and almond I sing 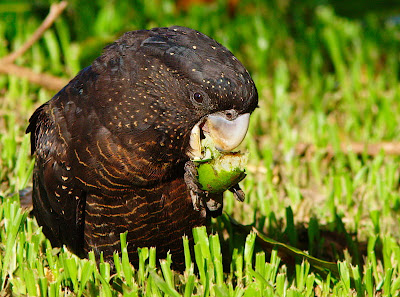 The Red-tailed Black Cockatoos have been raiding the Indian almonds again at the caravan park. Perch and shred them, nip them off, drop them and go to ground and shred them, makes little difference to the birds. But ground-munchers make it easier for me. Female above was happy to let me quite close in the morning sunlight earlier this week (click pic to enlarge). Still hoping for a decent in-flight picture! 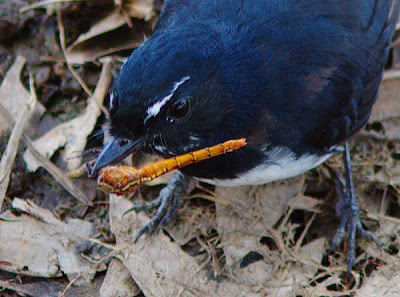 Capturing things in flight comes naturally to Willie Wagtails. One of the pair in more or less permanent possession of the hide and its surrounding paperbarks in Tyto snapped up a dragonfly yesterday morning. Looked in general guide to North Queensland fauna but couldn't ID it. 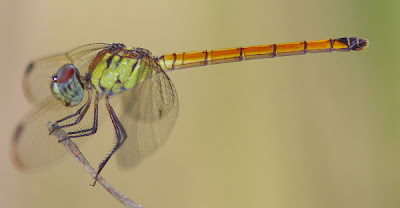 Today, while creeping about looking for Bush-Hens under trees beside an overgrown creek (and being distracted by the first Spectacled Monarch seen for many weeks) this dragonfly persistently flew into the shade and posed on a dead stem. It appears to be one of the same species that made up part of the Willie's breakfast yesterday.
A closing note, on the floods and bird counts: February's 89 total species sighted was about 10 down on lowest previous tally (in past five years). This month has brought just 56 species, about 15 fewer than I'd have expected. But a solitary Latham's Snipe appeared today, a pair of Green Pigmy Geese have returned to the largely deserted open waters, and the insectivores are more visible in resurgent grassland and woodland. The signs point to a count of about 110 for March. We'll see!
- March 05, 2009

Your bird photos are always great - lots of detail, clear and good colors. Technique and lots of practice I guess - definitely something to aim for!

Thanks Mick. Well, lots of shooting anyway. And it helps a lot when the birds stand still!

Lovely photos Tony. I especially like the Dragonfly - both, I should say, including the one in the WILLY'S beak.
I notice you have installed a scrolling Widget thingo. Is that monitoring the I and the Bird group, or the Nature Blog Network? Just curious, as all the entries are about birds. Wondering how it works.
Perhaps you might let me know. Hope it is too detailed.
Cheers
Denis
deniswilson23 at bigpond dot com

Hi Denis: Widget is from US. Feedzilla. Doddle to install. Just click on Grab it! at foot of scrolling window and take it from there. Most interests listed. But very US slanted and, of course, strong ties to .com sites.

Thanks Duncan. Imperfect, but one of the few I've posted to BirdingOz and Australasiaforum for critique.

Wonderful to get such a close shot of the Black Cockatoo Tony - we only ever hear and see them flying overhead. However, we have now planted several plots of both Allocasuarina torulosa and Casuarina equisetifolia which we hope will eventually entice the Black Cockatoos to visit us as apparently they are particularly partial to their tiny seeds.

Hope the trees do the trick. Pity the birds love exotics like Indian almonds (Terminalia catappa etc) and pine cones :-(