Jacana walks on: eggs go under 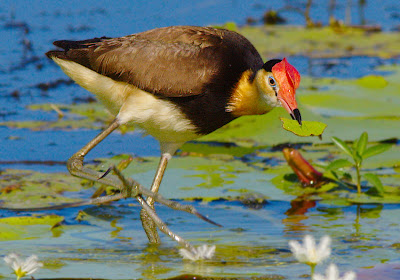 Sunny feeding time for this Comb-crested Jacana with snippet of vegetation in bill at Tyto yesterday. Not often the birds will allow one to walk up on them. Took my time edging along the lagoon and easing into the mud and water as the bird pecked away hoping for morsels on and under the water lily leaves. More trial and error than perceived prey behind the technique, it seems.
Even more trial and error on the part of the Jacanas that plonked two eggs on a straggly leaf and bits of lotus roots in the middle of the lagoon the other day. Got that sinking feeling when I studied the 'nest' (from 40 metres away) on Friday and saw sitting bird awash. Sure enough, eggs gone and the birds ignoring the site yesterday. Probably a not uncommon miscalculation by birds living most of their lives on flimsy flotation. 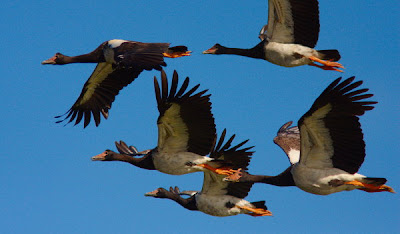 Got a fleeting look at three young Magpie Geese yesterday before they were hustled off into swampy long grass. In a reversal of life in fairy tales, the goslings begin as cuddly and adorable and progress quickly through colourful and attractive to long-necked and awkward (those with teen boys might see a pattern!). I don't think them ugly, young or old, but admit theirs is a rather singular beauty. 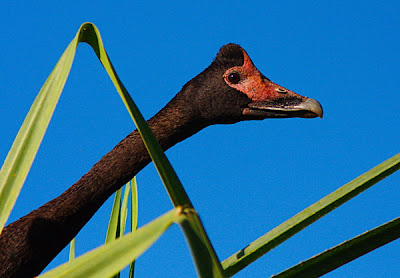 Also singular (though without much sing to its 'songs') is the Great Bowerbird. The bird above led me a long-winded dance in, under and around shaded trees grouped near the Tyto lookout yesterday. The 30 minutes or more was much punctuated by hisses, squawks, tinny gurgles and metallic gargles. In the contest between bird and photographer, I was outclassed and left behind a barriers of twigs or leaves and branches at every turn, gaining the one dodgy head shot with prey. As a last straw, the bird went silent and melted off unseen into the late morning.
Two other birds that melted off today were noteworthy for different reasons. First came early on when a Dollarbird floated into view above the new lagoon near the Tyto entry. As I focussed at longrange and hoped for a closer shot, five Masked Lapwings screeched into view and drove the Dollarbird off. First time I've seen such aggression against a Dollarbird. Never very many of them in the wetlands and such incidents may be common elsewhere.
Another to get the message to clear off was the first Little Eagle of the year, a particularly tidy and lightly coloured pale morph. No chance to get decent pictures because even when first spotted it was soaring and being harried ever higher and away by three Black Kites. A pale Little Eagle turned up several times last year, but I suspect today's bird is smaller. Whatever the case, it's always great to see a rare raptor!
- March 22, 2009

Great photos and descriptions - as usual! but the Jacana IMHO is brilliant!!

Hi Tony
Love the blue eyeliner around the Jacana's eye. Who does the make-up?
Stunning image.
Denis

Hi Mick and Denis: The closer you get the more attractive they become. Can't beat makeup by ol' Ma Nature!

Hi Tony,
Pity about the Jacana eggs but I suppose that's the reality of life on the lagoon. Fabulous photo of the adult Jacana, you are right, they do become more attractive the closer you get. Lovely to have some goslings - do the adults keep them on the move? I'm very fond of Magpie Geese, I especially love the soft calls they make when they fly on moonlit nights and their awkward perching in the tops of trees is a delight to observe.

Hi Barbara: Where there is ample feed the adults won't move far. Birds rarely breed in Tyto, almost certainly because vegetation on and around lagoons doesn't include tasty stuff such as blue taro, which is also great cover.