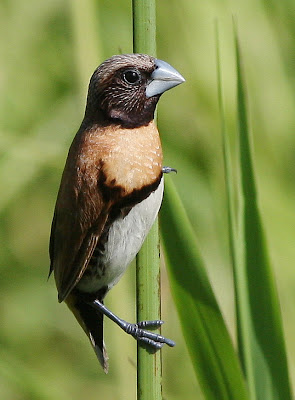 Standing up for oneself widely admired, but not so desirable for bird picture - as evidenced by this Chestnut-breasted Mannikin (Lonchura castaneothorax) in Tyto today. An upright avian citizen indeed. More generally, immature flocks of mannikins are starting to gather. Soon there'll be groups of 40-50 young birds foraging amid the seeding grasses. In past years Rainbow Bee-eaters (Merops ornatus) also have gathered in large flocks. But not in the wetlands recently. Have almost given up hope of decent aerial shots. 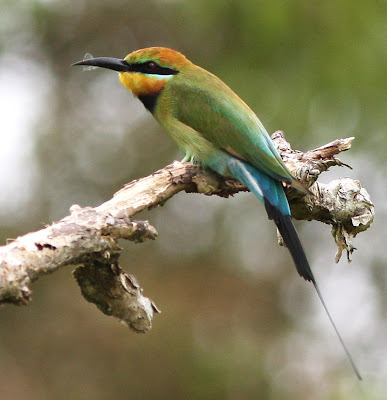 Shining Flycatchers persisting with nest today. Noticed male's only role is to chase Wille Wagtails away. Appears to do nothing toward building.
- March 22, 2010

That mannikin looks as though it was defying you to take a photo. You wait until the gang's together!

The oldies seldom get around in gangs big enough to scare me. (This is a first: almost live comment within my alloted hour at Ingham library!)

Very nice images of the Bee-eaters. Are they resident all year round?

The Mannikin is a little beauty. There are so many birds I still have to see.

Hi Mark: They'll mostly head off north when it gets colder. A few stick around, but closer to the coast.

Hi Mick: So many to see, so little time.

Hi Mosura: A model of rectitude!