Three morsels of food for thought 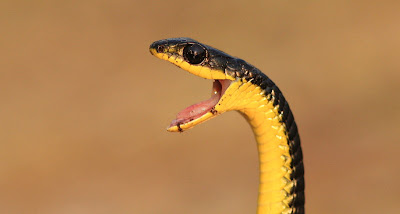 Food for thought in three Tyto encounters. Above, perhaps evidence of a successful underground strike - skink? frog? grasshopper? - by this Common Tree Snake (Dendralaphis punctulata). Spotted the snake half hidden within a wide crack during a recent evening outing. It re-emerged looking rather pleased with itself, almost to be described as licking its lips! Anthropomorphosis, anyone? 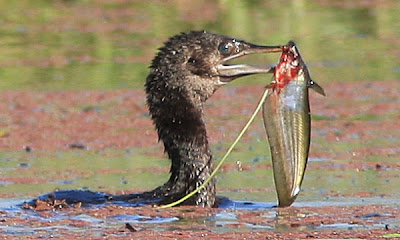 Little Black Cormorant (Phalacrocorax sulcirostris) comes up with a catch courtesy of an unknown predator that must have lost this fish after taking a severe bite from it. Though no more than knee deep and roughly 50 x 25 metres, the minor pool near Tyto's main lagoon could be carrying large eels, barramundi and turtles. Croc? A very long-odds maybe. 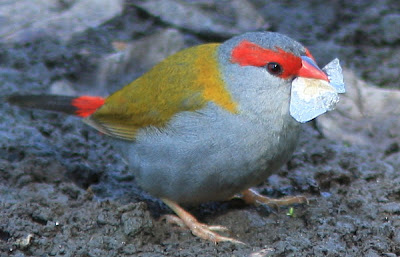 Red-browed Finch (Neochmia temporalis) clutches an African Tulip Tree (Spathodea campanulata) seed envelope. A pair of the birds spent several minutes picking up, carrying about and then discarding envelopes. Doubt if the birds are equipped to free the seed from the envelope. Haven't seen such interest previously. In fact, only Scaly-breasted Lorikeets (Trichoglossus chlorolepidotus) show a taste for the seeds. But they feed direct from split and drying pods, which hold hundreds of envelopes in three stacks.
- November 06, 2009

Are the second and third photos supposed to link to a larger photo. I notice the link icon (hand/finger) but nothing happens when I click them.

Hi Alan: No link apart from first picture in any post. And even that fails if picture is shifted at all after import. It's a limitation of the template, I'm afraid. Have been considering a change but haven't got around to it.