One in eye for Shrike-Thrush and me 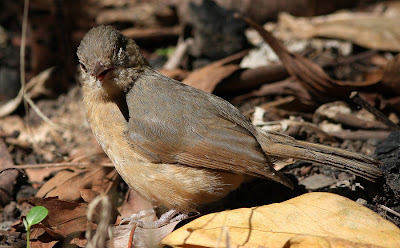 Little Shrike-Thrush (Colluricincla megarhyncha) on ground at Broadwater Forest Park, west of Ingham, today appears to be winking. Not so. After berating the bird for constantly closing eye as it did a spot of sheltered sunning I realised mistake: injury or ailment had led to permanent closure. Routine hazard for birds that spend much of their day poking heads into forest tangles, I suppose. 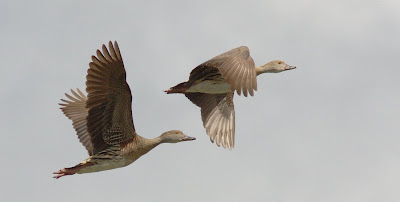 Sharp-eyed pair of Plumed Whistling-Ducks (Dendrocygna eytoni) turn away from the Tyto lookout over the weekend. The large flocks have gone (probably up to the tableland) but a few birds are still hanging about with the more numerous Wandering Whistlers. 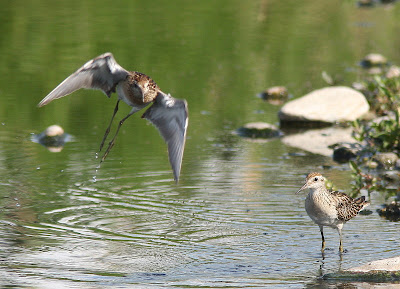 Also sticking around in limited numbers are Sharp-tailed Sandpipers (Calidris acuminata). This pair caught in middle of minor spat at a small wetlands just east of Ingham.
Finally, bad news at the Great Bowerbird bower. Flattened and pillaged. Possibly the work of another bird. More likely the doing of a Naked Ape. Restores my lack of faith in human nature!
- November 16, 2009

Hi Tony
Keep your lack of faith in human nature - you will never be disappointed!
Interesting that the Shrike Thrush is managing to survive with one eye.
Cheers
Denis

Shame about the bower. Wouldn't that be expected for a young inexperienced bird to have it's bower flattened by another bowerbird? (That's was not intended to sound like a leading question - I'm just curious as I am not familiar with Bowerbirds.)

You are right, Alan. Mature birds will wreck immature efforts. But in this case the demolition was damningly thorough.

Grr! People can be awful. What's the point of doing that?