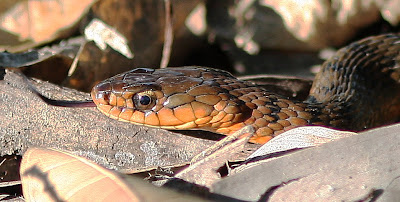 Change from feathers to cold-blooded types after a couple of lucky encounters this week. First, Keelback (Freshwater Snake) (Tropidonophis mairii) moves through a sunlit patch of leaf litter on the lookout knoll. The keeled scales show clearly along the back. Most Tyto Keelbacks are this orangey-brown coloration, or dark-light mix of greys. 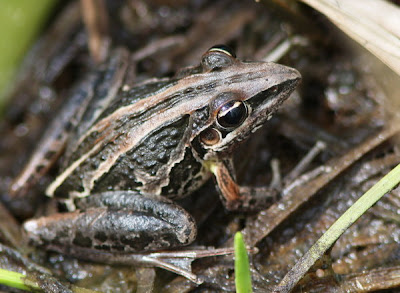 Second, Striped Rocketfrog (Litoria nasuta) finally stopped mad zigzag jumping through the reeds and settled down for closeup. Plenty of the frogs about, but fewer Keelbacks seen out among the reeds lately. The unseasonal rains may have made it harder for the snakes to track the frogs.

Third, though it lacks a common name, here's what I call the Common Striped Skink (Ctenotus robustus: similar to C. spaldingi and rarer C. nullum). It's one of two large (110mm snout to vent) skinks in Tyto. The other, much trickier to photograph, is the plainer Eastern Water Skink (Eulamprus quoyii).
Last, and odd footnote on the theme: picked from my forearm today the first leech I've met in six years. Not in Tyto, but possibly from, of all things, a metal gate at another little wetlands. Strange.
- November 22, 2009

Some great encounters. Beautiful detail in the Keelback shot.

Top Marx for effort. Return serve with bit of old wood and catgut.

Just catching up with some of the happenings at Tyto - fantastic series of shots of the Darter in your previous post.
Its interesting to see the colouring of the Tyto keelback - our keelbacks tend to have greyish heads with yellow tones underneath. Whatever their colour they do a good job of reducing cane toad numbers although I think they need some assistance to have any visible impact.

Hi Barbara: Interesting. I can't recall ever seeing a particularly yellow Keelback, over or under, but Reptiles of Australia lists the three colour forms.