Muscovy Ducks make goose of me 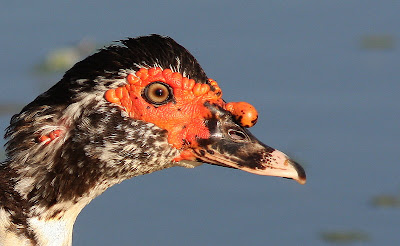 How's this for making a goose of oneself? Posted above picture of female on BirdingOz under title 'ugly goose' because pair of the birds turned up yesterday, engaged in vigorous mating, and my ancient brain forgot there existed any such thing as a Muscovy Duck (Cairina moschata) and asked for species ID. Doh! Wouldn't want to see the birds establish themselves, yet the head does hold some colourfully grotesque fascination. Doesn't it? 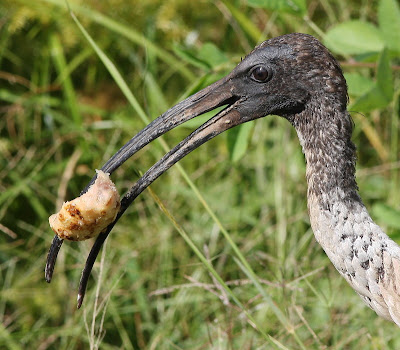 Here's another head full more of character than beauty. This Australian Ibis (Threskiornis molucca) appears to have a Cheese Fruit (Morinda citrifolia) habit. The solitary bird patrols plantings along the northern boundary to Tyto in its search for 'ripe' (also known as Vomit Fruit) falls. Not to my taste, though I'm partial to Camembert and Brie.

Heading towards a pleasing finish, a pair of Wandering Whistling-Duck (Dendrocygna arcuata) glide across a still morning's mirroring waters on the main Tyto lagoon. Though kitsch ducks on walls come in threes, in nature pairs are paramount.
- November 25, 2009

We have an established population of Muscovy Ducks in San Francisco. I too am transfixed by their hideous growths. I've seen quite a variety at the lake.

We've all done it! Not quite the same thing, but a friend asked me to identify a bird she'd been watching for a while and thought was behaving oddly. It was a bright orange sea rescue helicopter.

As for the ibis eating the morinda ... No wonder they can make a living from rubbish tips. I tried a morinda years ago and can still remember the taste. Urk.

People are always trying to give us Muscovy ducks. I find them rather ugly which is probably why they don't want them either. Unfortunately I've seen a few which have been dumped in town parks.

As for making a goose of ones self I remember sending a goose photo to an expert thinking it was a Snow Goose but it was just a domestic goose which had gone off to live with the local wild geese. (This was in Scotland)

Hi Tony
Beautiful, almost poetic ending to your parade of "uglies".
And yes, we have all made "Geese" of ourselves - (from time to time). In my case, the plural is appropriate.
Cheers
Denis

Most interesting to see Ibis eating Morinda, Cassowary like them too - they are great trees to include in areas being revegetated as they fruit when very young.

Re being a goose - well as everyone else has said ...we've all done it!
Cheers
Barbara

Hi Elizabeth: Two are ugly enough. If they establised in Tyto these huge ducks would likely push out native ducks.

Hi Bronwen: Ibis' garbage diets all the more reason to wonder that just this one bird craves Cheese Fruit.

Hi Alan: Don't blame you for ducking such gifts. Big males top scales at up to 20kg!!! They probably eat babies.

Thanks Denis and Barbara: But others' admissions of goosiness don't smooth one's own ruffled feathers and red face, is it not so?

About making a "goose" of oneself - I am still at the stage of checking with friends for ALL birds (except shorebirds) before I dare to name anything! Hopefully I will learn someday!! The last photo is perfect!