Buttonquail vanishes with a zip 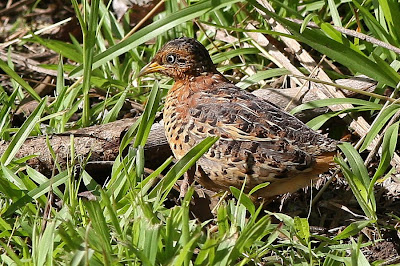 Red-backed Buttonquail (Turnix maculosus) takes a rare few steps away from cover before realising error and zipping back into the long stuff at Tyto yesterday. Have flushed a few lately, but the birds show no preference for any particular area so sightings are a matter of luck. 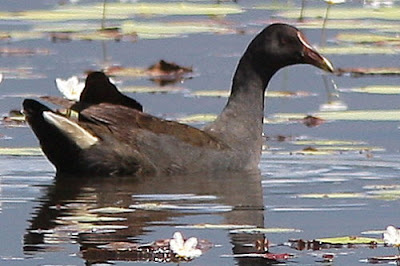 Lucky to see a Dusky Moorhen (Gallinula tenebrosa). This maturing bird dropped in for a few days and just as randomly disappeared. Unlike the only other Dusky sighted in the wetlands the bird stayed well away from the edges of the main lagoon.
Sticking close to the edges of the new lagoons under the even newer walkway from the info centre to the near completed cafe/civic centre/lookout tower, the two Muscovy Ducks that turned up earlier in the week. New species for Tyto, but a potential challenge to native birds.
Also turning up from out of the blue, an Oriental Cuckoo (Cuculus optatus). Spotted the bird flying from the west toward Rain Trees near the carpark two days ago. No sign since. Seldom seen in Tyto and last seen early in 2008.
- November 27, 2009

Dusky Moorhens are common enough down here. But your Red-backed Button Quail would get my adrenalin flowing.
Cheers
Denis

"More hens" up their than here. Never seen one locally.

Hi Denis: They get me going too. Trouble is they alsoget goingto quickly when they spot me :-(

Hi Alan: Never mind. As Denis (I think it was) has said elsewhere: climate change will send them all your way. ETS: Everything Tracks South.