Ulysses and the lilies 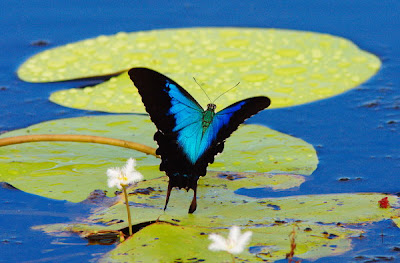 Ulysses butterflies clearly don't realise what glorious sights they make when out on the swamp lilies. Mostly, they jitter about among the trees - where they are almost impossible to frame for photographs. But it's 'wow' on those rare days when one gets out on the water flowers. (A snag with the lily flowers is their featheriness, so fine, light and tiny they almost always look out of focus.) 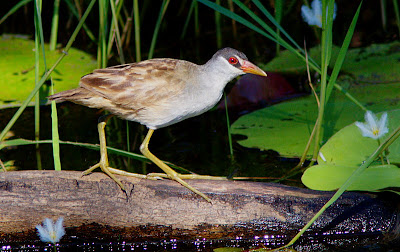 Another touch of local colour among the lilies: White-browed Crake pauses near the water before going back to 'tuk tuk tucking' in amid the scleria.
Lot of rain and sudden heavy showers in past few days. Adding to those woes, my modem turned pyscho and refused to recognise me! Sorted out after Telstra on-line techie took it over and gave it a swift kick up the password! 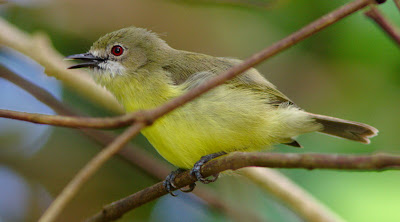 Got into Tyto for a dryish spell today. Forget the jokes, all the rain has meant the ducks have gone. Along with much else. Kingfishers aplenty, including an Azure teasing a sleek juvenile with a fish it seemed reluctant to pass on. But some days, as with the Fairy Gerygone above, there's always a branch or two in the way. But at least the modem's behaving...
- April 12, 2009

The butterfly is a "wow" moment - and the photograph is "wow" too!

Wow indeed Tony - it takes some patience to capture Ulysses with wings spread - lovely combination.
Re the weather - we're enjoying the rain although it does limit outside activities a little bit. Do the Ducks head west? What is your theory?

Thanks Andy, Mick, Duncan and Barbara.

And, yes, only two decent open-wing shots in 100+ before the butterfly quit the scene. As to ducks, my guess (theory would imply some depth of thought) is they go for the nearest sheltered water.