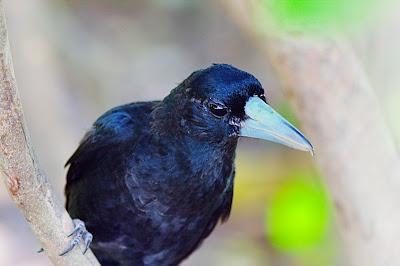 Black Butcherbirds (Cracticus quoyi) don't spend much time in Tyto and those that do often are quieter than in more usual habitats such as denser rainforest or thick belts of mangroves. Came upon two foraging through guava thickets today. Never any chance of photographing them together, but one went out of its way to get in frame. It landed on leaf litter close to my feet. Almost impossibly close for my lens, in fact, and, worse, almost totally hidden by guava trunks. Adding farce to frustration, along came a long-necked turtle on the dry litter - and scared the bird back into the understorey! Amazing that the above picture is even slightly sharp about the eye, since it was handheld at 1/30th second. 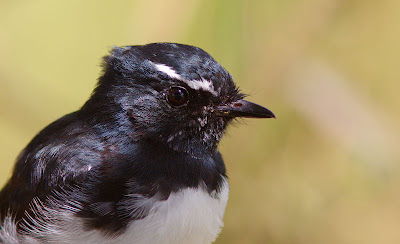 Here's another head, taken under easier circumstances, but also showing a drawback of using long lenses in relatively low light conditions. The Willie Wagtail is one of the Tyto hide resident pair, featured mouth full of dragonfly in earlier posts. Attractive enough pose, but notice the green cast where the black of the bird's outline shades into the distant background. Shorter lens, with greater depth of field, and/or fill flash would offset the effect, I think. Could use in-camera flash except it annoys birds at close range. And I keep forgetting to create a cheap slip-on diffuser. One day! 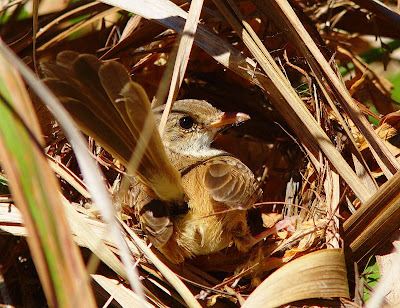 After the heads, comes a tail. Red-backed Fairy-Wren has nearly completed this nest, which it has sited atop bladey grass close to and almost facing the largely redundant Grass Owl viewing platform. It's lucky that few hopefuls any longer spend their evenings seeking the departed owls (which may only require a mouse irruption to return: or habitat change: or goodness only knows what). The female has done all the nest building. No sign of any male in area. Makes me wonder given the 'naive' placement of the nest if this might be a young bird playing house. As always, time will tell. I've resisted using the obvious heading, but can't resist having the bird ask: 'Does my bum look big in this?'
- April 05, 2009

Good to have something to laugh about these days. BTW, no action at nest site past two morns.