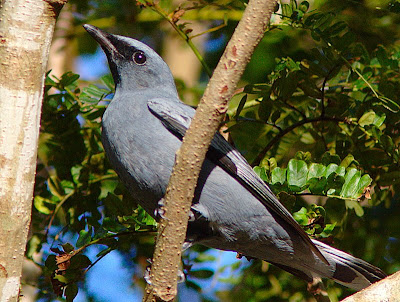 Male Cicadabird (Coracina tenuirostris) popped suddenly into view today and tormented me for the next 30 minutes by sticking almost entirely to deeply shaded upper reaches of trees in a small grove near the first Tyto lagoon. My cause wasn't helped by a Spangled Drongo determined - as they so often are - to bully the newcomer.
Cicadabirds seldom show up here in pairs. Males are rarely seen, but one or two females can often be found in the cooler months. Some of the birds are breeding migrants in southeast Australia and winter in the north and up into Papua New-Guinea, others are sedentary across the Top End. In my experience only birds in the south sound anything like a cicada. 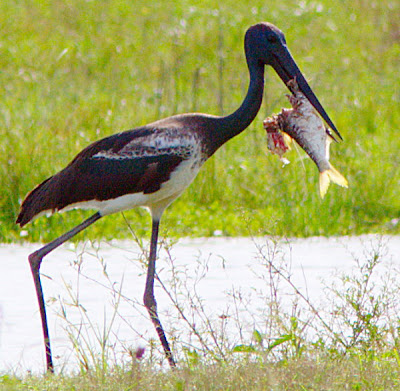 Catch of the day definitely goes to this Black-necked Stork (Ephippiorhynchus asiaticus). Even from afar the fish dangling from the huge bill was impressive. But the head was gobbled down before I got close enough for the picture. Interesting butchery technique. The bird dropped the fish on the ground and stabbed violently at it. Rough shaking followed. Thus one large fish (species unknown) became three great mouthfuls. 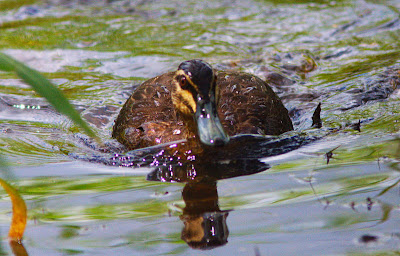 Offering itself as a possible mouthful, a sneaky Pacific Black Duck tries the 'broken wing' splash and dash as it seeks to draw me away from (unsuspected) nest or ducklings hidden in a patch of flooded grass. Just as well most predators are not alert to such giveaway signals. Instincts are not all they're cracked up to be!
- April 21, 2009

All great photos again - of course! What a huge fish for that Black-necked Stork. Hope the size of the mouthfuls didn't give it a tummy-ache!

(I've resolved to stop calling them jabirus when the mammal people drop the name 'bandicoot'.)

Hi Snail; They always go in my notebook as Jabirus. I'd be resolutely for it if were Aboriginal and not South American. (I've ranted in the past on the disrespect in Australia toward indigenous names. Lost cause, I'm afraid.)

Hi Tony
I didn't know that "Jabiru" was a borrowed name. Shame about that.
Great feed for that bird, anyway. I wonder if it had disposed of a lot of spines before eating the meaty bits?
Cheers
Denis