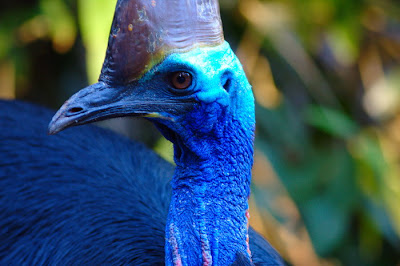 Getting up close for photography is the ambition. But too much of a good thing becomes quickly obvious when a Southern Cassowary (Casuarius casuarius) marches into view. Heading up to Wallaman Falls today, I met Mr Big sauntering down the road. I idled to a stop, grabbed the camera, and cranked the car window down a bit (not fully open, since the birds can be menacing beggars - if idiots have previously fed them). Anyway, low light, dodgy, shaky head-only shots, then bird crunched off into the forest. A frustrating forerunner. 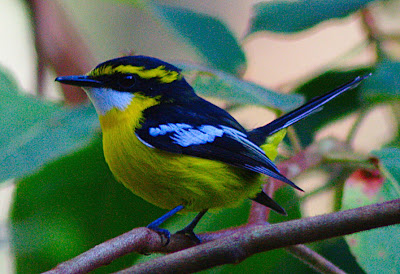 Next up, in a transmission tower clearing in the rainforest, quick grabs at a few locals. First, Yellow-breasted Boatbill (Machaerirhynchus flaviventer), flittering about in a wee island of small trees growing from a pile of old pine logs (self-sown and definitely unwanted). The reason for the bird's name is apparent below. 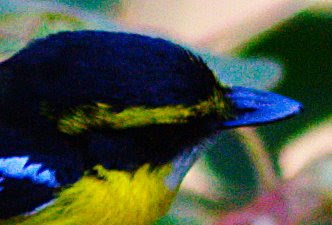 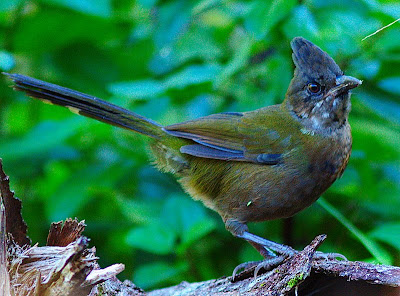 Also making itself busy on the piled logs, an Eastern Whipbird (Psophodes olivaceus). Proved excellent at posing for a split second and then whipping out of frame. And wasn't in the mood to get cracking on the vocals. 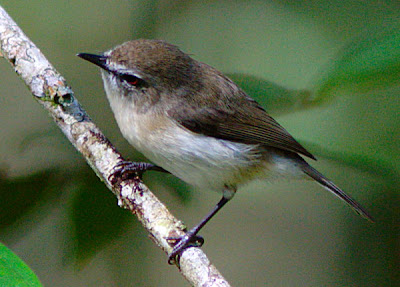 Plenty of noise from the Brown Gerygone (Gerygone mouki) hordes moving purposefully here, there and everywhere in the tall trees. This one bird of hundreds heard through the morning descended close enough to chase after. 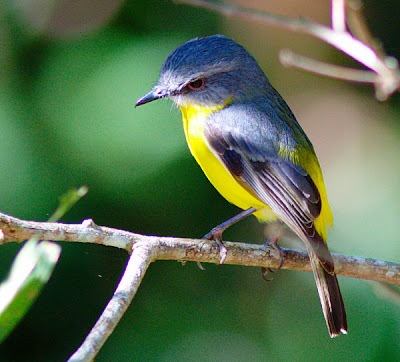 And that was probably because is was attracted to this Eastern Yellow Robin (Eopsaltria australis), which was fascinated by something on the ground, but maddeningly quit the chase as I got close. Nor would it indulge in any sideways perching.
Among others spotted: Noisy Pitta, Lewins Honeyeater, Grey Whistler, Topknot Pigeon, Red-winged Parrot, Brush Turkey, Laughing Kookaburra, Brown Treecreeper, Bowers Shrike-Thrush.
- April 26, 2009

Amazing photos - again! I reckon that was a bit too close to that big bird! Maybe it was lucky he just walked off.

You hit the jackpot, Tony!

Aah, virtual birdwatching.
Thanks Tony.
Great to see the big fella like that. Lucky you. But you are right to be careful. I have heard that they can be a menace, as Emus can be in Wildlife reserves where tourists go.
Loved the BoatBill especially.
Great shots of everything else too.
Cheers
Denis

Big head indeed, but what a magnificent big head. I still like your shot.

And what a wonderful close-up of the Boatbill's bill. Definitely boat-like.

Thanks for sharing these beautiful birds with us.

Wouldn't like to give impression the Cassowary is in general to be feared. People are vulnerable to accidental attack when sitting in a car with window open because birds fed by the thoughtless can take this as signal that grub's up - and lunge for expected food.

Standing tall (taller the better - size matters) and still and backing off is safest option if one meets a Cassowary on a track.

G'day Tony,
That was a beautiful collection of sightings and pics. You can probably sense my envy.
Gouldiae

A belated comment as we are presently holidaying with family in Brisbane environs... I glanced at this post the other night before going to Mt Tambourine and so I was able to identify Brown Gerygone with confidence. Thank you Tony!