First, the bad news. Not only no sight or sound of the Lovely Fairy-Wren (Amurus amabilis) but the nest was today one egg light and the surviving egg felt a bit cool. A quad bike had left minor skid marks on the dirt road right beside the nest. But the rider was probably a pig hunter, licit or illicit.

My suspicion is a cuckoo. Soon after reading about cuckoos supposedly carrying eggs to plant in nests I witnessed the end part of more probable behaviour. A Brush Cuckoo (Cacomantus variolosus) flew into view with a small white egg in mouth, landed on a branch, swallowed the egg, and flew off.

Many birds have demonstrated the capacity to distinguish between small numbers. If the preyed-on wrens know two from three, it makes sense that the parasitic predator does also. It would also make sense not to waste food by throwing the host bird's egg(s) away. Wren watch continues tomorrow.

The good news was stumbling upon Large-billed Gerygones (Gerygone magnirostris) and a White-browed Robin (Poecilodryas superciliosa) at their nests, the first about 750mm long dangling over a rainforest creek, the latter in plain view about two metres up in a dying Tulip Tree sapling in Tyto.

There is no thick rainforest in Tyto but the fire trails lead a kilometre or so southwest to a dense 4sq km patch of forest, swamp and riverine jungle, all largely hidden from the highway by stands of pines and conifers and semi-ringed by sugar cane and flood grasses.

Chasing the high-pitched 'zeep' of an Azure Kingfisher (Alcedo azurea), I edged down a steep creek bank, spooked a duck lurking in the dark-shadowed long pool - topped up by unseasonal rains - and found two Large-billed Gerygones flitting about in trees across the water in front of me. One was carrying nest material. 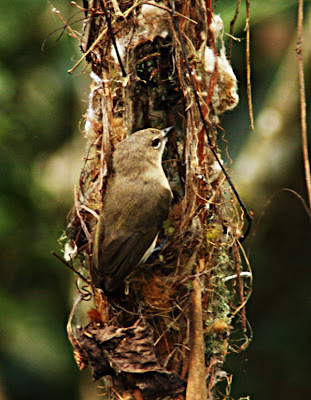 The bird flew toward me to the nest - which dangled with entry hole almost right in front of me - popped the additions in place and headed away for more. Another site to keep an eye on. I left them to it. Cuckoos may not however. 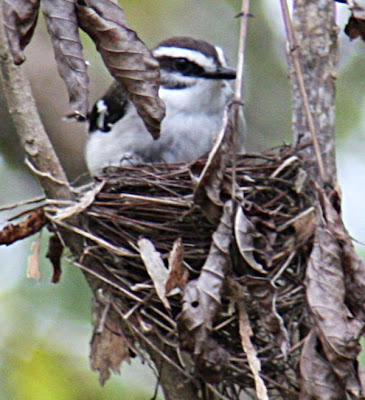 Cuckoos also make use of White-browed Robins, which usually build low on horizontal branches in shaded groves. Today's find appears to break every building code. Will try for better picture tomorrow, and see if clambering up nearby tree allows a view into the nest.

More good news, but stop reading if you hold all creatures equally sacred.

Feral pigs (Sus scrofa) began running amok early last year. After months of failed action, the shire got a professional trapper in. Nine shot in one trap at the edge of the main lagoon today brought his kills to more than 80. Tough on the pigs, but left alone they churn and destroy huge areas, and cost cane farmers a lot of cash.

All up, more good news than bad. An excellent read - thank you!

I second that TT.

Thank you both. Some days just present a flowing story, don't they?

Thank you both. Some days just present a flowing story, don't they?

G'day Tony,
A beaut report. It's nice you've been able to catch some of our smaller and secretive birds at their nests. Well done.
Well done that pig trapper too, I say!
Gouldiae.

Sorry about the little wren nest but very interesting observations of the cuckoos. You have a great variety of small birds up there too.

Hi Tony.
I am not familiar with stories of adult Cuckoos removing eggs. Interesting report of your observation. The young Cuckoos do push eggs out.
You can tell Cuckoo eggs apart from Wren's eggs, as they are very long and thin, to allow for extremely fast delivery (laying from outside the nest, as often the Cuckoo female is too large to enter the nest. She just perches at opening of domed nest, and squirts the egg into the nest.)
Nice photos of the Scrubwren and Robin at their nests.
Denis

Thanks mick and denis. My original reply somehow vanished into the blogosphere. Am getting a few odd quirks since I changed one or settings. And today got stalled in Html mode while trying to add fourth pic to latest post. Have also meant to ask if others have problems with text formats changing when pix are added or shifted in a post?

Hi Tony
Re text formatting, I had exactly that problem tonight.
I find it starts if I cut and paste some text from another website (as a quote). I never have that problem if it is text I have typed in fresh.
Hard to control, and the font formatting options are very limited, and do not seem to work properly, once something has started to play up.
The only solution I know is to copy text, and then re-type it in freshly (and then delete the original stuff with the bad formatting).
Very clunky, and annoying.
Denis