Birds in my face, under my feet 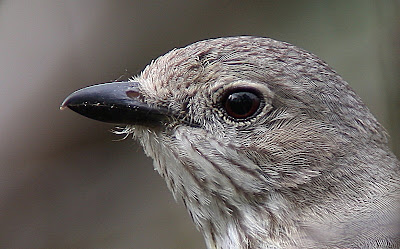 Female Rufous Whistler (Pachycephala rufiventris) flew so close to me I'd have missed this picture with other than my 28-300mm Tamron macro. Since I have no other lens, I got a picture.
Target until the whistler turned up was a juvenile Mistletoebird (Dicaeum hirundinaceum). The bird's feeding added to the colour of its vivid gape. But it stayed just out of range and light enough for a good shot. 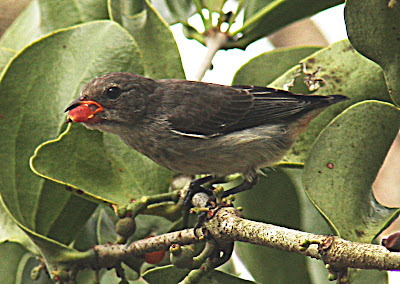 No success with the camera at my favourite rainforest creek either. However, after joking earlier about taking years to find an Azure Kingfisher's dirt-tunnel nest, a bird popped out right under my nose (or feet) today.
Where was it? Two metres from where I watched and shot Large-billed Gerygones building their long dangling nest over the centre of a creek pool!
Over more than four weeks and at least 20 visits to the site - and many sightings of Azures - I saw no behaviour to suggest a pair of the birds had a nest virtually beneath my feet.
The water level has risen more than 600mm after recent rain. There's no easy crossing to the opposite bank. The tunnel entrance will be in shadow, severely backlit for much of the day, and eight metres off - too far for my in-camera flash.
But a bit of sit and watch is obviously called for. Keep you posted.
- October 20, 2008

Nice portrait of the whistler. Well done on spotting the Kingfisher nest. Looking forward to any updates.

I smiled at this and I feel sure you will come with some ingenious method of watching and photographing the Azure Kingfisher from a more appropriate position. I will be keen to hear of your progress :)

lovely detail in that whistler shot Tony, the Tamron did a good job.

@ Mosura: Bit lucky with RW. Only too keen to post positive moves by Azures.

@ Mick: Thanks. As to luck, Gary Player said: 'The more I practise the luckier I get.' (But he was a much better golfer than I am a photographer.)

@ Gaye: Top birds as they're usually so unwary. Re your nest post: I suspect failure rates from laying to fledging are much higher than generally thought: and very much higher for some species. But I don't have a lot of figures.

@ Duncan: First top shot from lens, bought as allrounder until 'prime' time demands (300L+1.4x) can be either afforded (Bless you, Mr Rudd, but not 400L worth) - or no longer resisted!