Heron, but hearing no bitterns

Did first transect and stood at listening post as part of national Little Bittern (Ixobrychus minutus) survey today. Not a gurgle was heard. Should be sightings soon as males start sorting out things before breeding. Almost sure the birds stick around all year though guide books talk of possible migration to Papua New Guinea. 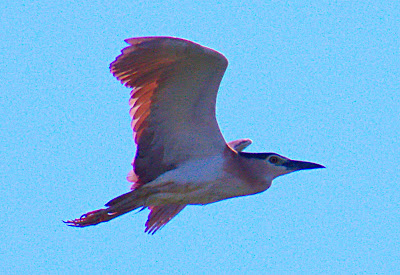 If there's no bittern to be seen, what's next best? Well, next to them in some books is the Nankeen Night Heron (Nyticorax caledonicus). Right on cue, a heron flew out of a paperbark close to a lotus pool tucked away in a seldom visited corner of the wetlands.
Night herons enjoy freshwater mussels. Opened shells along the waterline are a sign of the bird. (But shells piled in heaps mean rats at work). Once flushed the birds usually fly off some distance and warily keep an eye on their disturber.
Today, I noted the probable hideout tree, circled around and checked out other birds. An hour later I snuck in on the bird's blindside - and almost got away with it. But not quite. So, a distant flight shot with lighting far from helpful. Another for a next time. 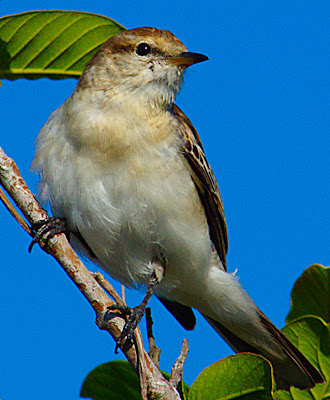 Did a bit better with an eclipse male White-winged Triller (Lalage sueurii). Two birds foraged among new-growth weeds before one obliged by flying up close to me. The White-wingeds come and go. A few breeding males were active and noisy early last month but nothing much came of their frantic hover-fluttering and calling (to show females where the male plans to build and mate).

Evaporation on the main lagoon is speeding up. But as yet the consequence has been many more departures than arrivals. Sandpipers and others should find the shallows and mud more to their liking by beginning of November.
- October 26, 2008

Always nice if the birds can present themselves in page order :-)

A nice flight shot of the heron and a very nice photo of the triller. You must have an amazing environment up there to get the variety you do. Could we please have some scenic photos sometime to show more of that, please?

I'm with Mick Tony, some scenics would give this southerner more to drool over.

Okay, Mick and Duncan, your wish is my command, though I'm more cynic than scenic.