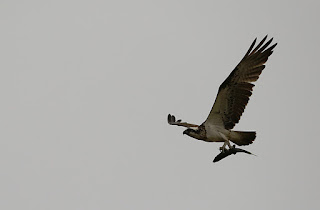 Shame, Mr Osprey. Shame, shame, shame on you. Female Osprey appeared through the overcast and drizzle yesterday with fish for fast-growing juvenile. But before she starts ripping into fish and feeding junior in nips male and steals off. 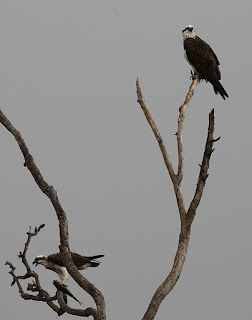 She follows but does no more than perch and watch as he tears into junior's breakfast. He might claim to have earned the feed for earlier chasing away a Brown Goshawk that entered the nesting territory. She, however, has proved  just as feisty when other raptors get too close. 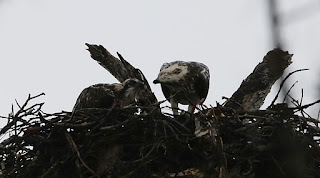 And he may know she's the better fisher. It had taken her only 12 minutes from quitting nest to returning with the fish at issue. (Later in the day one of the birds missed twice before success from a  third plunge into shallow water: first fishing I've seen by any Osprey in local bay.) And juvenile didn't have to wait long for feed. No thanks to Mr Greedy Gobbler!