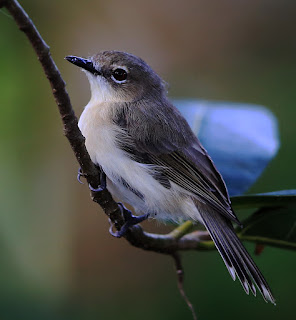 Started June with touch of luck in getting Large-billed Gerygone (Gerygone magnirostris) up close near Tyto main lagoon lookout yesterday. 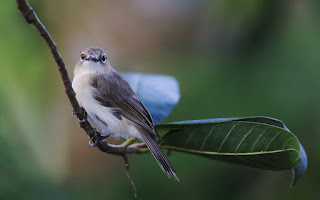 Pair of birds flitted about an old nest dangling beneath cluster fig tree. Checked here and there and then cleared off as suddenly as they appeared. Perhaps thinking of another nest nearby? Who knows.

So, almost 100 species seen in last week of May. 67 yesterday during slow walk over the main tracks. Time to make an effort before the southern birders get up here in force. Set them a challenging sort of target. Roughly 245 species on current list. Roughly, because several sightings must be more than 15 years old. And several of the latest claims are decidedly dodgy. And shire's division of 245 into total Australian birds of roughly (that word again) 900 and therefrom claiming Tyto as 'home' to 27.% of Oz birds is even dodgier. But there should be a relatively easy 100 species seeable in a week, and maybe 130 in a month. We'll see what we're able to see.

Above, continuing a new theme of challenges for the shire (as nothing else over several years has achieved desired changes - such as trustworthy map, clear signage, moderated sightings, flora and fauna surveys, and more, Complaint?  Hide fails to hide anything much. Better would be double slatting to preserve some airflow while giving some 'hide' to those entering it. But Tyto's still a splendid birding experience. Just ignore the joke map and signs and challenge yourselves.

I'm glad you say the map is crap. I was there in early March and got geographically embarrassed leaving the wetlands! Now that takes talent getting lost on a track you have travelled just a short time previously. But ... I had a great walk with several life ticks. Cheers. Jack

Music to my ears, Jack.