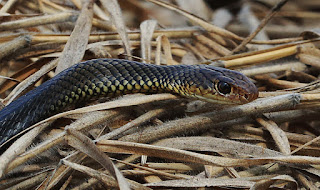 Months of seeing back half of snake slipping away into long Town Common grass without being absolutely sure of species ended with Greater Black Whipsnake yesterday finally presenting front half to camera. The para grass surrounding the pool at Payets tower is probably home to more than six snake species. Mostly they're seen when swimming across open water. 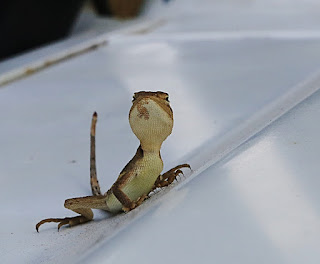 One of their prey targets, Two-lined Dragon well out of snake danger on bonnet of Troopy. Nope, not my doing. It appeared from 'nowhere' the other morn. Clear bonnet one second, Dragon hood ornament the next. Odd, because dragon claws don't grip like skinks'. As seen when it nipped through open driver's door to inside Troopy but was easily scooped up as it kept trying to scale rubber matting over transmission tunnel, getting halfway up only to slide back down again. 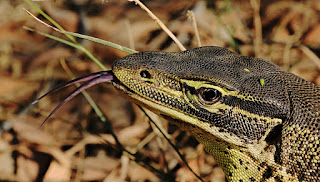 Wouldn't be easy scooping metre's worth of Yellow-spotted Monitor from inside Troopy. But though the invitation's been made a few times my friend with a big earth burrow at the Pandanus viewing area prefers to walk alone. And it's a bit too big to pop out of nowhere and perch on Troopy's bonnet.