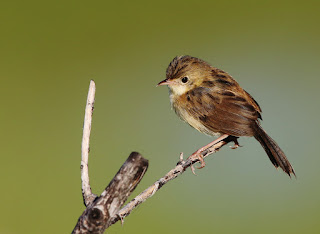 Longish walk for bung knee today in quest of info from the field after hearing of purported Zitting Cisticola sightings in the Town Common. Four kilometres, four hours and 54 Cisticolas (yep, 54!) later and nothing but Golden-headeds. Zip Zittings. Zilch Zittings. Zero Zittings. Okay? 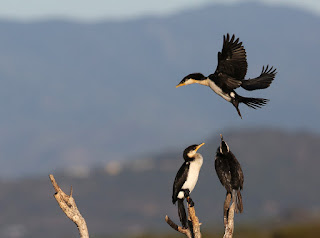 Not much room along the bund between Freshwater and Bald Rock given the hordes of Cisticolas, but Little Pied Cormorant spied chance to drop in on two pals. 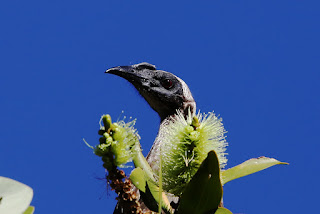 Also crowded with action, paperbarks and eucalypts at walk's outward end (for me), with both Helmeted (above) and Little Friarbirds prominent, though neither species calling, unlike plenty of honeyeaters and others. 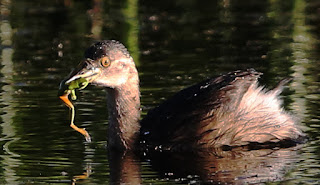 Bit of luck too, catching the only Australasian Grebe seen, coming up with green frog. Probably regular enough part of the diet, but I can't recall any similar sighting. Sorry about image; long way off.